Police found five fetuses in the home of a self-proclaimed "anti-abortion activist" who was indicted this week on federal charges alleging that she was part of a group of people who blocked access to a Washington, D.C., reproductive health center.

The Metropolitan Police Department says officers were responding to a tip about "potential bio-hazard material" at a home in Southeast Washington on Wednesday when they located the five fetuses inside.

WUSA-TV captured video of police searching the home and reported that the home belonged to Lauren Handy. The 28-year-old was one of nine people charged in an indictment that was made public on Wednesday that accused the group of traveling to Washington, blocking access to the reproductive health center and streaming it on Facebook.

The station, which first reported the discovery, said Handy told a reporter that "people will freak out when they hear" what detectives found inside her house. Handy did not respond to a message sent to her Facebook profile seeking comment. 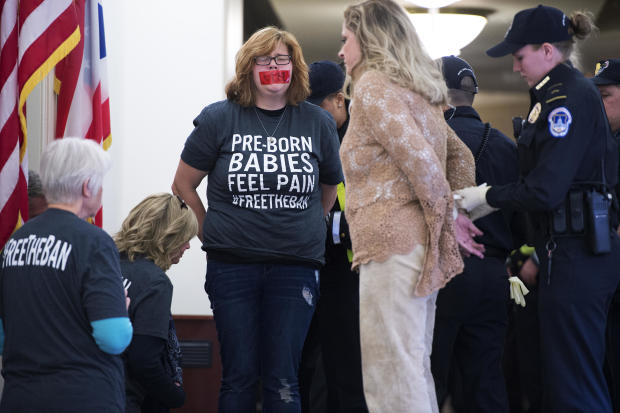 Capitol Police arrest Lauren Handy, third from left, of Anti-Choice Project DC, and other pro-life demonstrators who participated in a "pray-in" outside the Longworth office of Speaker John Boehner, R-Ohio, to protest a canceled House vote that would ban abortions after 20 weeks,
Police said the five fetuses were collected by Washington's medical examiner and the investigation is ongoing.

In the indictment, prosecutors said Handy had called the clinic pretending to be a prospective patient and scheduling an appointment. Once there, on Oct. 22, 2020, eight of the suspects pushed their way inside and began blocking the doors, according to the indictment. Five of them chained themselves together on chairs to block the treatment area as others blocked the employee entrance to stop other patients from coming inside, the indictment alleges. Another suspect blocked people from coming into the waiting room, prosecutors charge.

Handy and the eight others were charged with conspiracy against rights and violating the Freedom of Access to Clinic Entrances Act. The federal law, more commonly known as the FACE Act, prohibits physically obstructing or using the threat of force to intimidate or interfere with a person seeking reproductive health services.

Closer to Stillwater today than I was last year

How can you do that?

RxCowboy said:
How can you do that?
Click to expand...
My thoughts as well. How is this possible, let alone conceivable?
R

“Police find five fetuses inside crazy person’s home.”
Click to expand...
And it's not even Halloween. If after all that and no evidence gets found to charge someone for doing illegal abortions, so babies can be saved, then she is both disgustingly stupid and ghoulishly sick in the head.