PFB - What Would the Big 12 Look like without Oklahoma and Texas?

The Big 12 is in the most trouble it has ever been in.

With reports of Oklahoma and Texas considering a leap for the SEC, the Big 12 could soon be left without its two biggest brands and no clear future in sight. Higher ups from around the conference are set to discuss the situation Thursday afternoon, and I’ll be straight with you: times seem bleak.

Could the Big 12 survive without the household names of the Sooners and Longhorns? That remains to be seen — and maybe we won’t see what that looks like. But with the threat of that looming, I took at a look at what the conference could look like if those squads left and tried to reimagine a new Big 12.


It would be ridiculous to think that any two schools the Big 12 could manage to add would be a one-to-one comparison to Oklahoma and Texas in terms of brand power.

So, to counter that, I think it would behoove the conference to return to 12 teams. This still probably wouldn’t fully replace the space the big brands took up, but it would certainly do a little more. This leads back to one question: Who are the right teams?

Could the Big 12 Pull a Power Five Conference Team without OU or UT?

Thoughts of, “Why not bring Colorado/Nebraska/Missouri back?” are fun, but in reality, it is hard to imagine the Big 12 would be able to pull any team already in the SEC, Big Ten, Pac-12 or ACC to a conference that is on the ropes. Those schools would be safer in their current Power Five conferences than jumping to a potentially sinking ship and with the uncertainty of the TV contract coming up in 2025, safety might be staying put.


Houston: To me, the Cougars are the obvious choice for an addition to the Big 12.

The University is in a prime spot in fourth-most populous city in the U.S., and Houston’s student enrollment of about 45,000 trumps that of the remaining Big 12 schools.

As far as athletics go, the Cougars have been on the cusp for a leap from Group of Five to Power Five for years. The University had a clause in Tom Herman’s contract that he would get a bonus should Houston join a Power Five league, and it added a similar clause in Dana Holgorsen’s deal. So, the Cougs have been posturing for this for a while now.

Since joining the American in 2013, the Houston football team has gone 60-38, spanning the tenures of Herman, Major Applewhite and Holgersen. The Cougars also have a blossoming basketball program headed by Kelvin Sampson. The Cougars made the Final Four this past season.

SMU: It seems as if the Mustangs might finally be recovering from their death penalty in 1987.

The once-great football program has a 34-26 record the past five seasons, but in the last two years, the Mustangs have gone 17-6. SMU is also stepping up its game in recruiting, as it had the No. 51 class in 2021, ahead of TCU, Kansas State, Iowa State, Kansas and Texas Tech. Its 2022 class is also in good shape, ranking 52nd in the country, ahead of Kansas State, Texas Tech, TCU and Kansas.

The numbers 51 and 52 aren’t great, but that would probably be boosted if SMU could make it to a larger conference.

The elephant in the room with SMU (and Houston to an extent) is whether other Big 12 Texas schools want to share their space. SMU is about a 45-minute drive from TCU, and the schools are longtime rivals. To me, that’s the kind of stuff this rebooted Big 12 would need, though — more compelling storylines.

Boise State: Boise State has established itself as one of the premier Group of Five football programs in the country since its Fiesta Bowl win against Oklahoma in 2007, but the time never seemed right for them to jump to a higher league. Maybe that changes now.

Since the Mountain West was formed in 2011, Boise State has had seven 10-win (or more) seasons. Boise State has also found its way into the AP Poll in every season since 2002.

The enrollment of about 23,000 at Boise State is also on par with the rest of the Big 12. This might finally be the time for the Mustangs to make the leap.

North Dakota State: Stay with me on this. North Dakota State is in a weird spot. It wouldn’t make sense for the Bison to join a Group of Five conference, they’re arguably in a better spot basking in FCS national championships. So, if NDSU were to jump to the FBS level, a rebuilding Big 12 would be perfect.

In the nine seasons between 2011 and 2019, the Bison won eight FCS national championships. The Bison have also had two quarterbacks taken in the Top 3 of the NFL Draft as of late (Trey Lance and Carson Wentz).

NDSU is also already an affiliate member of the Big 12, competing in wrestling.

BYU: An independent, BYU (more Cougars) always comes up in conference realignment, but the whole not playing on Sundays thing seems to be an issue.

BYU’s enrollment is huge for a private school (about 31,000), and the Cougars have devote (to say the least) supporters.

How Would I Do It?


Give me Houston, SMU, Boise State and North Dakota State in this new look Big 12. Boise State fits about as well as West Virginia geographically, but, at least for football, the divisions could be split North and South to save some travel. 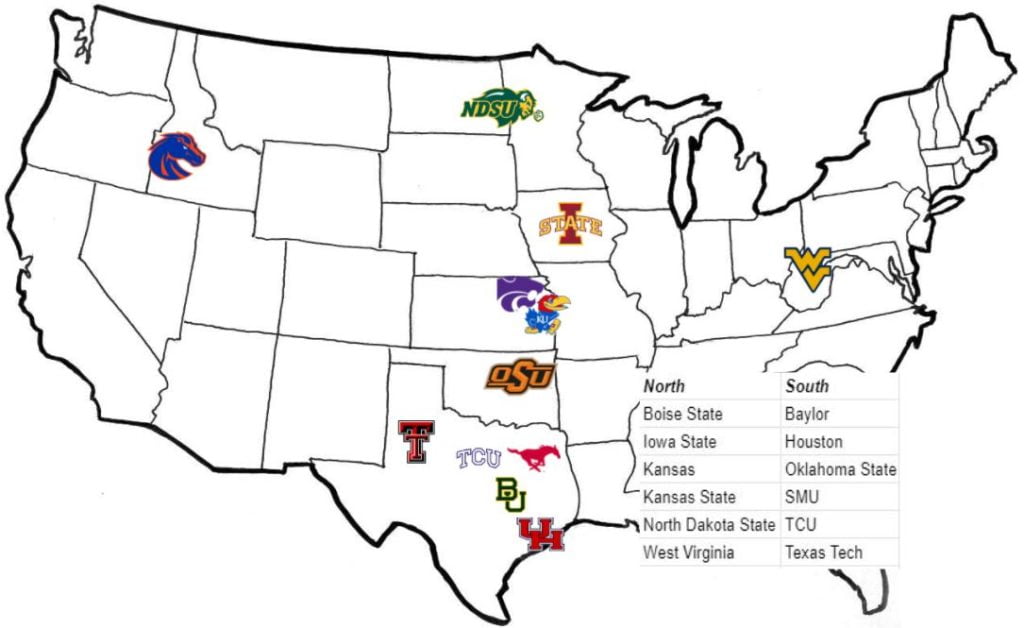 The post What Would the Big 12 Look like without Oklahoma and Texas? appeared first on Pistols Firing.