Oklahoma State has never lost to Alabama in football, something that will be tested again in 2028.

The two team’s only meeting came in the 2006 Independence Bowl in Shreveport, Louisiana, where a second-year coach in Mike Gundy took on a coachless Crimson Tide.

I was 11 when this game was played and probably watched it, but I don’t remember a ton about it. So I went back through it Wednesday and thought I’d give a few thoughts.

OSU entering the Independence Bowl: The Cowboys entered this game 6-6 on the year, with their most notable win of the season coming against No. 20 Nebraska in late October. Bobby Reid started all 12 of OSU’s games at quarterback, where he completed 56% of his passes for 2,054 yards and 23 touchdowns.

Alabama entering the Independence Bowl: The Crimson Tide also entered this game 6-6 but finished the regular season on a three-game skid. Alabama was just 2-6 in SEC play, beating Vanderbilt and Ole Miss. The Crimson Tide’s other wins were Hawaii, Louisiana-Monroe, Duke (an 0-12 team) and Florida International. Alabama coach Mike Shula was fired before the bowl game, leaving interim coach Joe Kines to lead Alabama against OSU.


• The coverage starts by talking about the Alabama coaching situation and gives a fun chart. Notice, Nick Saban is on the “Not Interested” and “Possibilities” section of the table. He would eventually get the gig. I want to go see what the Jon Gruden timeline is like, personally. 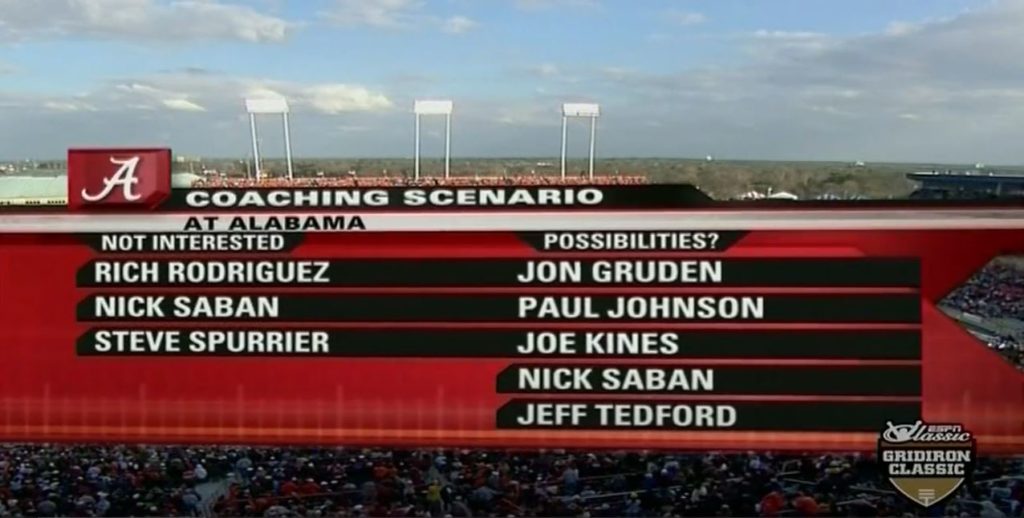 • There might never be a more Alabama quarterback than John Parker Wilson. 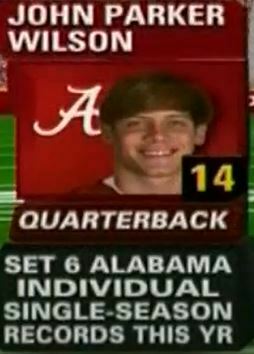 
• OSU runs a jet sweep to Zac Robinson on the second play from scrimmage. More of this, please.

• The Cowboys force a fumble on Alabama’s second offensive play and recover it. Vance Bedford’s boys are flying around. Martel Van Zant, who is deaf, forced the fumble.

• On OSU’s first play of the ensuing series, Reid throws a wide receiver screen to Seth Newton who throws it back to Reid, but Newton’s pass skips off the ground. More of this, please.

• Reid converts a fourth-and-2 from Alabama’s 31 with a bootleg. Pre-mullet Gundy is letting the Mullet flow.

• Alabama has a running back named Jimmy Johns. No relation to the sandwich chain to my knowledge.

• The Crimson Tide put together a strong drive. Going nine plays and 72 yards as Wilson finds Matt Caddell for an 18-yard passing TD to tie things up. 7-7.

• With that TD, Wilson set Alabama’s single-season passing touchdowns record with 17. To show how much times have changed, Mason Rudolph and Brandon Weeden threw 37 each during their senior seasons. Seventeen passing TDs doesn’t even crack OSU’s Top 10.


• Adarius Bowman makes a one-handed snag to put OSU on Alabama’s 10-yard line. In the pantheon of great OSU receivers, he doesn’t get enough credit. 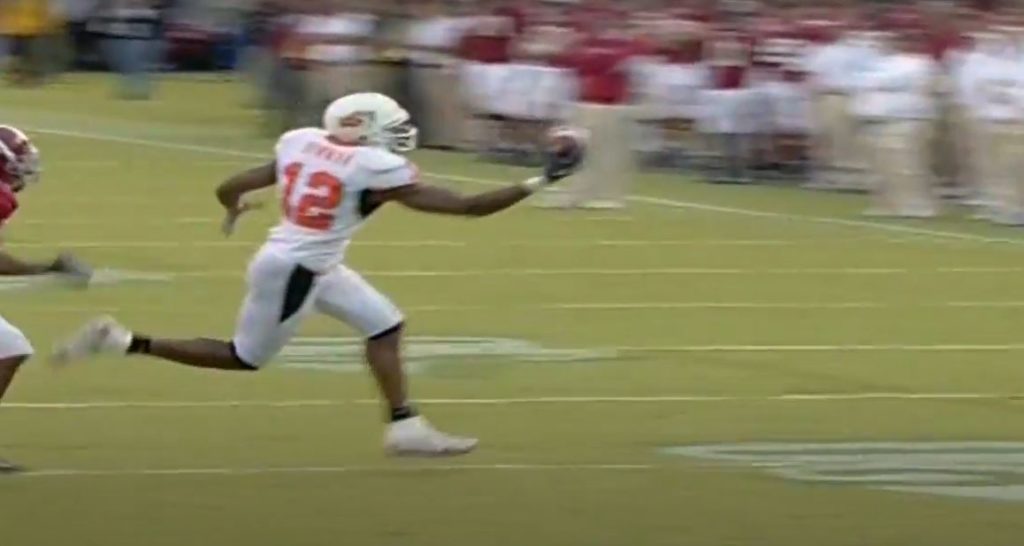 • A freshman Keith Toston scores from 4 yards out. 14-7, Oklahoma State.

• Brandon Pettirgrew, just a sophomore, catches a pass over the middle and it takes all of Tuscaloosa County to bring him down. Another great who doesn’t get mentioned enough.

• OSU bullying Alabama up front is a crazy thought in 2021, but it’s happening in the Independence Bowl. The Cowboys have 103 rushing yards to Alabama’s 30.

• The Cowboys turn up the tempo to score in 1:49, leaving 49 seconds in the half. Toston was big throughout the drive, running and recovering a fumble. He caps the drive off with a 7-yard TD run. 24-14, Oklahoma State.


• It’s wild that Donovan Woods played quarterback in 2005 and now he is laying out receivers as a linebacker in 2006. Wonder if Spencer Sanders or Shane Illingworth will ever make that jump?


• On fourth-and-1 from Alabama’s 42-yard line, Gundy goes for it, and Reid picks up the needed yardage on an option play.

• Savage has an innate ability to know how many yards he needs and contorting his body to get those yards.

• As Gary Thorne is commenting on how good OSU’s punting and punt coverage has been, Alabama’s Javier Arenas, cousin of former NBA star Gilbert Arenas, returns a punt 86 yards for a score. 31-24, Oklahoma State.

• Brandon Jones fumbles on the ensuing kickoff, and Alabama recovers. Bama has the ball at OSU’s 21-yard line down a touchdown.

• Alabama ties the game with a big-man touchdown. It’s a throwback to lineman Andre Smith from 2 yards out. 31-31.

• It’s all going south for OSU right now, as Reid throws an INT.

• The Cowboys’ defense keeps the game tied, forcing a punt.

• Savage takes a screen pass 25 yards to get OSU in field-goal range with 50 seconds to play.

• OSU takes a timeout with 18 seconds to play with the ball on Alabama’s 8-yard line.

• Reid takes the ball between the hashes and kneels at the 10. Timeout Oklahoma State with 13 seconds to play. Alabama takes a timeout to attempt to ice Ricks. Make that two timeouts from Alabama, the double ice. … Three timeouts, the triple ice.

• Twitter started in 2006, if this guy was on it, he probably posted something like “I don’t care how much Saban wants, pay him his money.” 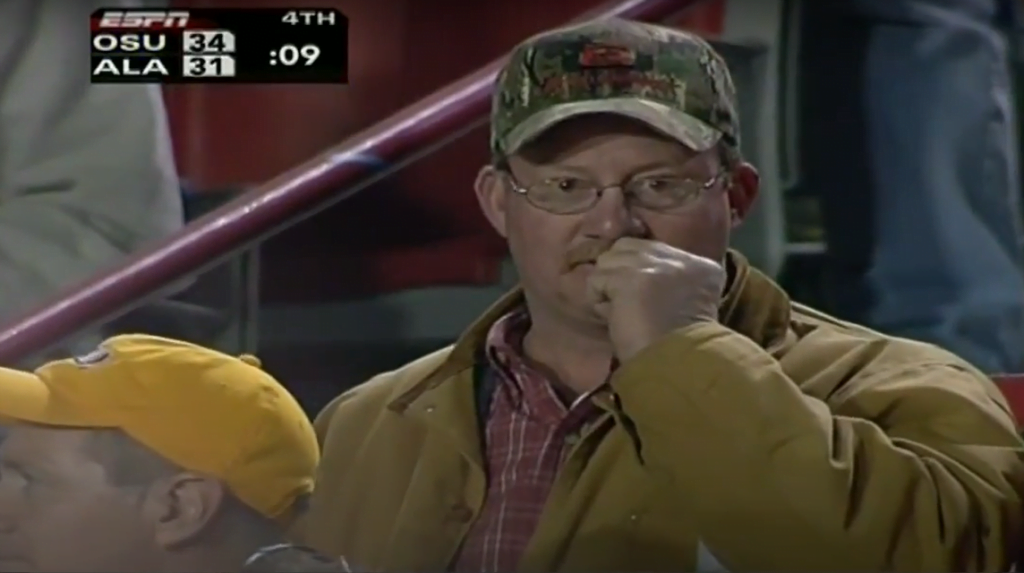 • Alabama attempts a series of laterals at the end of the game that proves unsuccessful.


Alabama hired Saban six days after this game and hasn’t looked back. Saban would go 7-6 in his first season in 2007. Since then, the Crimson Tide have had double-digit wins every season.

The Cowboys would again go 7-6 in 2007 before rattling off four straight seasons of nine or more wins, including the 12-1 2011 team that won the Big 12 and the Fiesta Bowl.