The Cowboys will played four top-10 teams in the span of a week.

The Big 12 has rescheduled Oklahoma State’s postponed games against West Virginia and Baylor. The Cowboys will travel to Waco on March 4 before heading straight to Morgantown for a game against the Mountaineers March 6.

Those games lead into the Big 12 Tournament in Kansas City on March 10-13.

There might not be a tougher stretch of games for anyone in the country.

— Mike Boynton (@thacoachmike) February 23, 2021​
This news comes with a lot of reschedules the Big 12 had to announce. The league also canceled West Virginia’s game at Baylor. Here is the full list of league games for the week of March 1-7, via the Big 12. 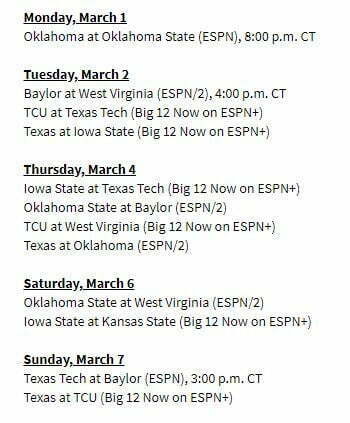 Cade Cunningham didn’t play in OSU’s first meeting with the No. 2 Bears. The Cowboys held a 36-32 lead at the half against Baylor, but the Pokes couldn’t keep up. Baylor won 81-66.

OSU lost its home tilt with the Mountaineers in disappointing fashion. The Cowboys held a 19-point lead with 11:15 to go before Bob Huggins’ squad roared back to win 87-84. Derek Culver finished that game with 22 points and 19 rebounds. Cunningham and Isaac Likekele combined for 47 of OSU’s points.

The Cowboys are 15-6 and 8-6 in Big 12 play. The Pokes sit sixth in the league standings, a prime spot as that means OSU would avoid the first round of the Big 12 Tournament at this point.