Click to expand...
Need to fire up the herb and pump this thru the Marantz at just below ear bleed to give it a proper listen


I went and saw SIMO at VZD's on Saturday. Great show. If you get a chance, go see them.

This is audio only and definitely worth a listen. The link to the stream is included in the story.


First Listen: Jimi Hendrix, 'Both Sides Of The Sky'

At this point, some 47 years after Jimi Hendrix' death, it's probably unrealistic to expect that a set of deep-vault studio tracks can expand the guitarist's legacy in any meaningful way. This no doubt dismays the Hendrix obsessives, who pine for the long-whispered-about radical experiments they believe Hendrix squirreled away in some Electric Ladyland broom closet.

For the rest of us, the arrival of any sort of Hendrix material, especially if it's captured in the studio, is a chance to be awed, all over again and in surprising ways, by this human's freakish powers of musical persuasion. No rock figure before or since could breathe fire like Hendrix does, on his beloved well-known albums and on the assortment that is Both Sides Of The Sky. Even when he's playing the well-worn heard-it-a-zillion-times blues like the opening track "Mannish Boy." Even when he's dropping an over-the-top theatrical solo on his original "Hear My Train A-Comin'" that alternately celebrates and shatters blues tropes.


When Johnny Cash died almost 15 years ago, he left behind a treasure trove of unpublished poems and handwritten letters. The new album Johnny Cash: Forever Words, out now, immortalizes those words in music.

The 16-track record is a follow up to the 2016 book of the singer's poems, Forever Words: The Unknown Poems and includes stirring vocal performances from Elvis Costello, John Mellencamp, Brad Paisley, Willie Nelson, Alison Krauss and more. The man who brought the words and musicians together is Johnny and June Cash's son, John Carter Cash, one of the record's producers.

Not sure you can pigeonhole these guys into one genre. A little Rock & Roll, a little R & B, and a little Americana, but they are different and pretty talented.

I hope others from the OP family had a chance to see the Eagles tonight at the BOK Center in Tulsa. It was strange without Glenn, but his son Deacon did a fantastic job. It also never hurts to have Vince Gill in your band. What a concert.

When they started the show with "Seven Bridges Road", you knew it was going to be great. The harmonies were the same as ever.

Check out Sunny War and The Marcus King band.

Click to expand...
Whether it truly stirs one's chili or not, there is no denying his genius.

37 years ago, MTV debuted and video killed the radio star

Aug. 1, 1981, might not immediately come to mind as an important date in history, but to a generation of music fans, it was monumental. On that day, 37 years ago, a cable TV channel that played music videos around the clock made its debut.
It's funny to think about now, but there was a time — for about the first decade of the channel's existence, really — when the M in MTV actually mattered. Sure, plenty scoffed at the concept of a radio station on TV — built on a new art form, the music video. But to young GenXers, it quickly became after-school appointment viewing.

Part of MTV's impact — for better or worse — was that it transformed music into a multi-sensory medium. It wasn't enough to sound good; suddenly bands had to be hypersensitive to their visual image — whether that meant shooting videos in Sri Lanka, a la Duran Duran, or playing up their oddball looks, such as ZZ Top.


But of greater importance to musicophiles was that MTV suddenly provided an important outlet for new music. Radio at the time was largely programmed by Baby Boomers, but MTV broke new and more cutting-edge bands. That's because few music videos even existed at launch. The form had already taken hold in Britain, so much of MTV's initial inventory consisted of new wave bands from across the Atlantic — the Buggles' Video Killed the Radio Star was the first video shown; others in early rotation included Squeeze, Roxy Music, ABC, Culture Club and plenty of other acts who otherwise wouldn't have found much of an audience on U.S. soil.
MTV later went on to develop non-music programming, and the Internet eventually became the outlet of choice for music videos. But thanks to the Internet, we can all relive the music of Aug. 1, 1981. Yes, someone has put together a Spotify playlist called "MTV: First 24 Hours." Bless you, Sarah Jayne Gipson, whoever you are.


Feel old yet? I had just turned 13 and remember it like it happened yesterday. Completely changed music for me.

Today we have some incredible, never-before-seen footage of John Lennon recording his seemingly cutthroat song, "How Do You Sleep?" It's a song he released in 1971 and directed at his former Beatle bandmate Paul McCartney. Here's just a sample of the lyrics:

This previously unseen video, which includes the raw studio mix of the audio, completely unadorned, comes ahead of the Oct. 5 release of a 6-CD box set, Imagine - The Ultimate Collection. John Lennon's second solo album, Imagine, was released in Sep. 1971, just about two years after The Beatles went their separate ways. John Lennon said that this song was a response to lyrics on Paul McCartney's own solo album, Ram, that Lennon felt were directed at him. (Give a listen to "Too Many People" and "Back Seat of My Car" and you'll hear what Lennon was referring to.) Yoko Ono, who sat in on and co-produced these recording sessions, wrote to us to say that "John wrote many great songs, some tender and some mean... ... people thought this was about Paul, and Paul seems to have thought that too, so too bad it wasn't played too much."

The 120-page book included with the box set contains this from John Lennon: "If I can't have a fight with my best friend I don't know who I can have a fight with. I think it's quite funny and I was laughing when we were making it and listening to it. I was laughing at his later, but first I was saying, 'Oh, I see, that's what he thinks,' huffing and puffing." 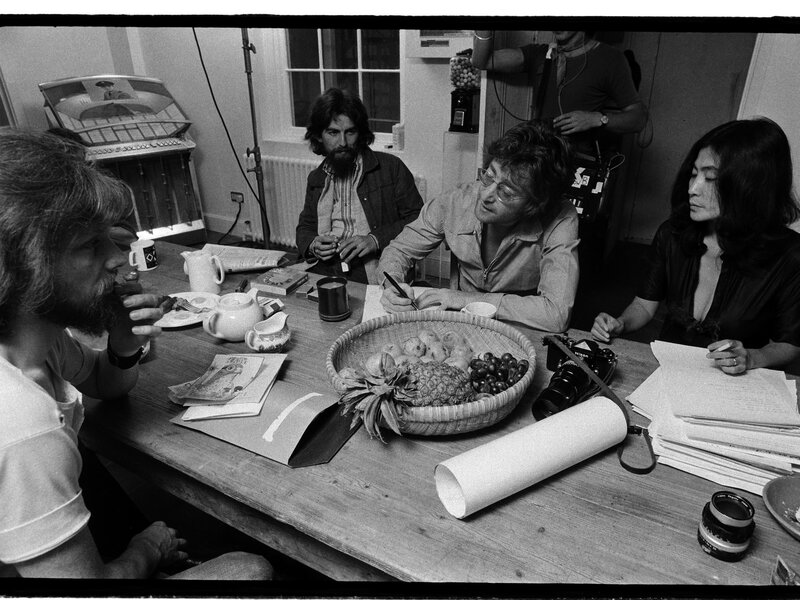 For me what is so striking about this recording is its starkness. Here you have John, sans the voice doubling he loved so much, none of the Phil Spector strings that shaped much of the character of the release we all came to know in 1971. What you do have on "How Do You Sleep? (takes 5 & 6)" is a brilliant slide guitar performance from the former Beatle George Harrison, the relaxed bass of Klaus Voormann, Alan White on drums, and Nicky Hopkins on Wurlitzer electric piano. John called George's playing "his best guitar solo to date on this cut, as good as anything I've heard from anyone, anywhere."

The recording was made at Ascot Sound Studios, a studio built by John Lennon and Yoko Ono in 1970, on the grounds of Tittenhurst Park in the English county of Berkshire.

The Imagine box set also includes a 140-track collection, remixed and remastered, including a 5.1 surround sound mix. Engineer Rob Stevens wrote to NPR to say, "Our approach, meaning Yoko and myself, was to make the listening experience as if one had the exceptional privilege of sitting in the middle of the studio with the players either around them (the 5.1 surrounds) or in front of them (the stereos), without any of the effects or sweetening (strings, chamber echo, tape slap, etc.) that were subsequently added. We had a hunch that the initial performances stood on their own, even though at the time the sweetening clearly helped the record reach the heights that it did and continues to do."

Tom Petty's Legacy Lives On As 'An American Treasure'

"The only time he was out of pain, I think, was when he was onstage," Dana Petty, wife of the late Tom Petty, says.
Sam Jones/Courtesy of the Tom Petty Estate

Tuesday, Oct. 2, marks the one-year anniversary of Tom Petty's death. Members of the prolific musician's family and longtime band have spent much of the past year listening to his early and unreleased recordings. Wanting to mark the occasion, Dana Petty, wife of the late musician, and Benmont Tench, Petty's longtime keyboardist, started combing through the rock star's vault. They made selections for a box set that offers a kind of alternate musical history of the singer who died of a drug overdose in 2017. The 60-song posthumous release, Tom Petty: An American Treasure, contains unreleased tracks and rarities from Petty's decades-long career.