CRFF - What Today’s Texas, OU rumors could mean for OSU 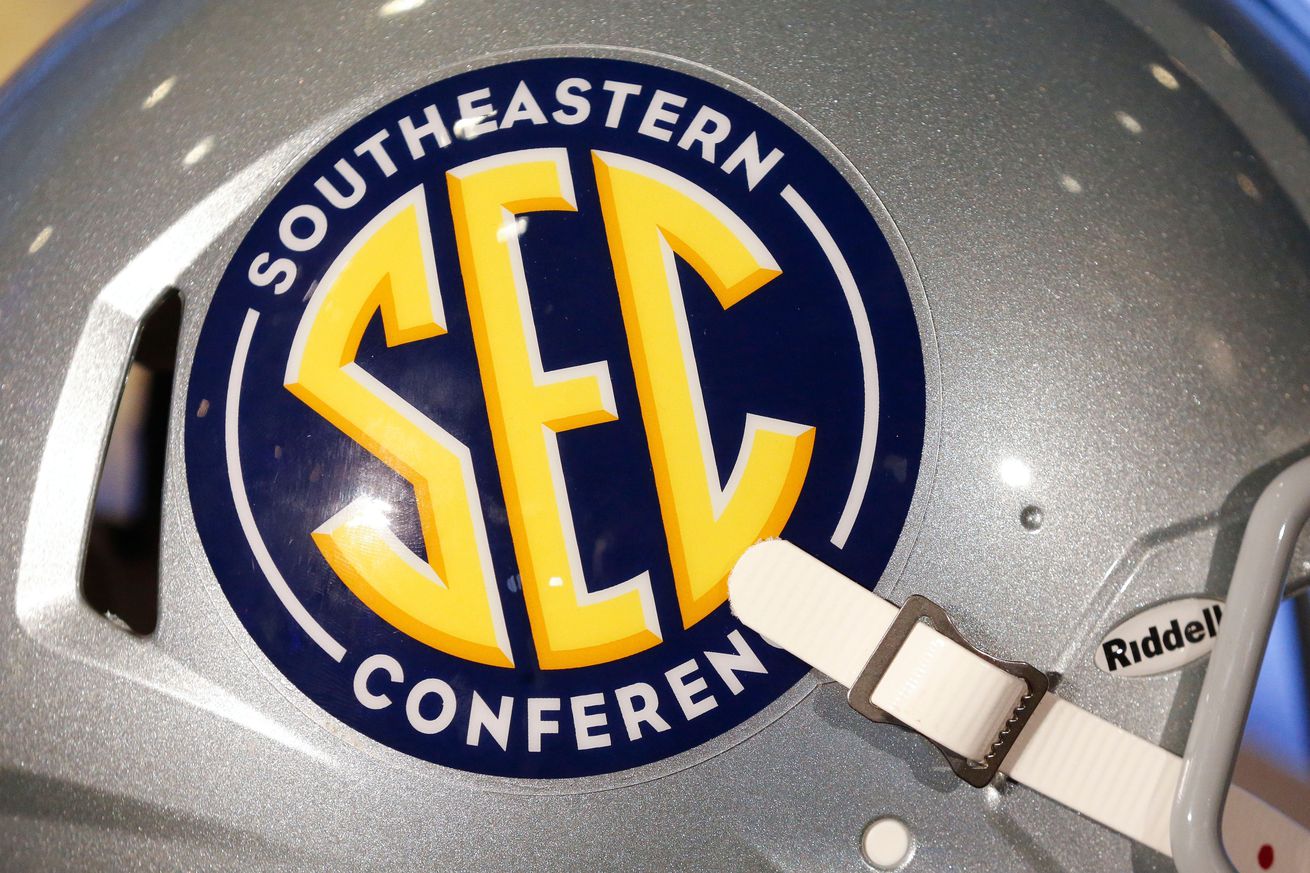 The Houston Chronicle learned on Wednesday that Texas and Oklahoma — the two flagship programs in the Big 12 — have inquired about the possibility of leaving the Big 12 for the SEC.

The implications of that move would obviously be massive and would send college sports into its first wave of massive realignment in nearly a decade. With just 10 teams currently, it is hard to see any way in which the Big 12 Conference survives a move by its top two members. What that leaves its other eight members to do is anyone’s guess.

Not much is known at this time but neither school has reached out to decline allegations, according to Brian Davis of the Austin American-Statesman and Carson Cunningham of KOCO 5 news.


A Texas spokesman has this statement about the SEC rumors: "Speculation swirls around collegiate athletics. We will not address rumors or speculation."

"The college athletics landscape is shifting constantly. We don't address every anonymous rumor."

— Carson Cunningham (@KOCOCarson) July 21, 2021​
Those certainly aren’t denials! Of course, this is pure speculation at this point. Just because Texas and OU have reached out about the possibility of leaving for the football super conference, that doesn’t mean the SEC would ultimately admit the two schools even if it does consider it. Texas and OU to the SEC is far from a done deal and likely wouldn’t take place for a few more seasons if it does happen, in which case the remaining Big 12 schools would have some time to figure out what to do next.

It isn’t surprising either. The Big 12 paid out between $38 million and $42 million for member schools in the 2019 fiscal year. The Big 10 paid member schools $55.6 million and the SEC paid out $45.3 million to its schools. Every “power 5” conference has its own television network other than the Big 12, which has Big 12 Now behind an ESPN+ paywall. The financial benefits to be reaped by jumping to the SEC could be the main reason for this potential move.

Oklahoma State is reportedly getting a head start on figuring out what to do next just in case, according to this statement released by the school:

— Marshall Levenson (@MarshallLevy14) July 21, 2021​
That certainly indicates Oklahoma State is already starting to imagine a world where OU jumps to the SEC and the Big 12 falls apart. If OSU is already thinking about, fans are sure to wonder as well.

One fan presented a scenario in which Oklahoma State joins Texas and its Bedlam rivals in joining the loaded SEC. This includes 18-team conferences with some current G5 powers joining the P5 (or four, in this case) ranks.


If Texas and Oklahoma leave the Big12, it will crumble. Don’t worry, I’ve already created the four super conferences. pic.twitter.com/3ldKYQgIbQ

— Derek Ferch (@DerekFerch) July 21, 2021​
While certainly intriguing, I think a scenario with 16-team conferences is more likely. Operating under the assumption that Texas and OU join the SEC and that no conference would kick out a member school to add another — which we haven’t seen happen in realignment yet — here’s what I think could happen to the remaining Big 12 schools.

The Big 12 would cease to exist. It cannot survive losing its two biggest members even if it adds other teams. In this case, I think we shift to the previously suggested four power conference model with 16 teams in each conference. The SEC would be at a full 16 teams with the addition of Texas and Oklahoma and would be done adding. That leaves eight Big 12 teams left to find a home.

The ACC and Big 10 each have 14 teams currently and would need to add two each to match the SEC. The PAC-12 has 12 teams — the only conference aptly named for its number of institutions — and would need to add four teams. With Baylor, Iowa State, Kansas, Kansas State, Oklahoma State, TCU, Texas Tech and West Virginia needing to be reassigned or dropped to the “group of five” or independent, here’s what I came up with.

Let’s get the easy part out of the way first: a geographical match for West Virginia. I have the Mountaineers joining the ACC so that way the Big 10 — which definitely needs to be renamed at this point — can take Iowa State and Kansas State. That makes sense for those three schools geographically and it puts the Big 10 at the 16-team threshold. The ACC may be the lone conference here with 15 football teams unless it can convince Notre Dame football to join, otherwise, the addition of WVU gives it 16 teams in every other sport.

That makes 16 teams for the SEC, ACC and Big 10 and just 12 teams for the PAC-12. That means the PAC-12 could add four of the remaining five Big 12 schools. My guess is the conference adds Baylor and TCU to keep those two together and rounds it out with Oklahoma State and Texas Tech, two similar schools.

Before I discuss what those divisions would look like, there are two pressing questions to answer in my opinion. In a world with NIL opportunities for athletes and a playoff expanding to 12 teams to give the best group of five schools opportunities as well, do the top group of five schools look to capitalize on this movement? SMU has become an attractive option, landing three top-115 players in the last two classes. Dallas is the perfect market for NIL opportunities and players may value being a top dog at a school like SMU rather than just another guy at a school like Texas. UCF, Boise State, Memphis and others are in this conversation as well.

The other question to ask involves Kansas. You may have noticed I didn’t give the Jayhawks a home in all the realignment madness. Obviously, Kansas has a marquee basketball program with some of the best facilities in the nation. The same can’t be said for many other athletic programs in Lawrence. It feels wrong leaving Kansas out of any conference, but UCONN has a marquee hoops program as well and the Huskies recently joined the Big East for all programs other than football, which went independent.

A similar model might or might not work for Kansas, but Jayhawk basketball doesn’t feel like it belongs in anything but the best. A move to the Big East or West Coast Conference — each of whom have great basketball programs — would make the most sense, but still feels wrong to me. However, the rest of Kansas’ athletic programs aren’t necessarily desirable and I don’t know where they fit in. But the reality is realignment like this is never going to be perfect, so the Jayhawks are a casualty here.

Now, here’s what I think my reimagined PAC-12 looks like with Oklahoma State in it: 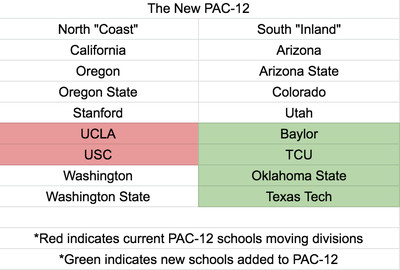 (As a side note... can you imagine USC and Oregon coming to Stillwater? I realize Oregon is in, like, 15 years or whenever for a non-conference game, but still. Or how about a solid recruiting base in California and Washington? Sign me up.)

As a visualization, Alabama will play all of its SEC West division mates — Arkansas, Auburn, LSU, Ole Miss, Mississippi State and Texas A&M — and SEC East members Florida and Tennessee. The Crimson Tide plays Tennessee every year as a rivalry game while the other SEC East opponent rotates. It is unclear how the addition of another team to each division would change things.

Because I’m essentially making all this up as a hypothetical, here is what I would do. I would require each team to play five of its division mates every year, leaving three conference games against non-division mates. In this scenario, Oklahoma State would play five of the seven of Arizona, Arizona State, Baylor, Colorado, TCU, Texas Tech and Utah every year. Whichever two they don’t play would be on the schedule the following year. Then, OSU plays three of Cal, Oregon, Oregon State, Stanford, UCLA, USC, Washington and Washington State every year on a rotating basis. That leaves four non-conference games which could be OU — who would also have four non-conference dates — and three others.

That paints the picture of a conference not as strong at the top as the SEC and Big 10 — and nobody the same level as Clemson in the ACC — but also a deeper conference than the SEC and on par with the depth of the Big 10, or whatever they hopefully rename their new 16-team monstrosity.


There is plenty to be determined at this time and this isn’t the first instance of rumors about Texas and Oklahoma trying to abandon the current digs in hopes of joining the far more lucrative SEC. In a world where money is key, the Big 12 is lagging behind in terms of television deals that have proved to put other conferences ahead.

While it is scary to think of what another round of landscape-changing realignment looks like, it is good to hear OSU is aware and will do whatever it takes to put the school in the best position possible.