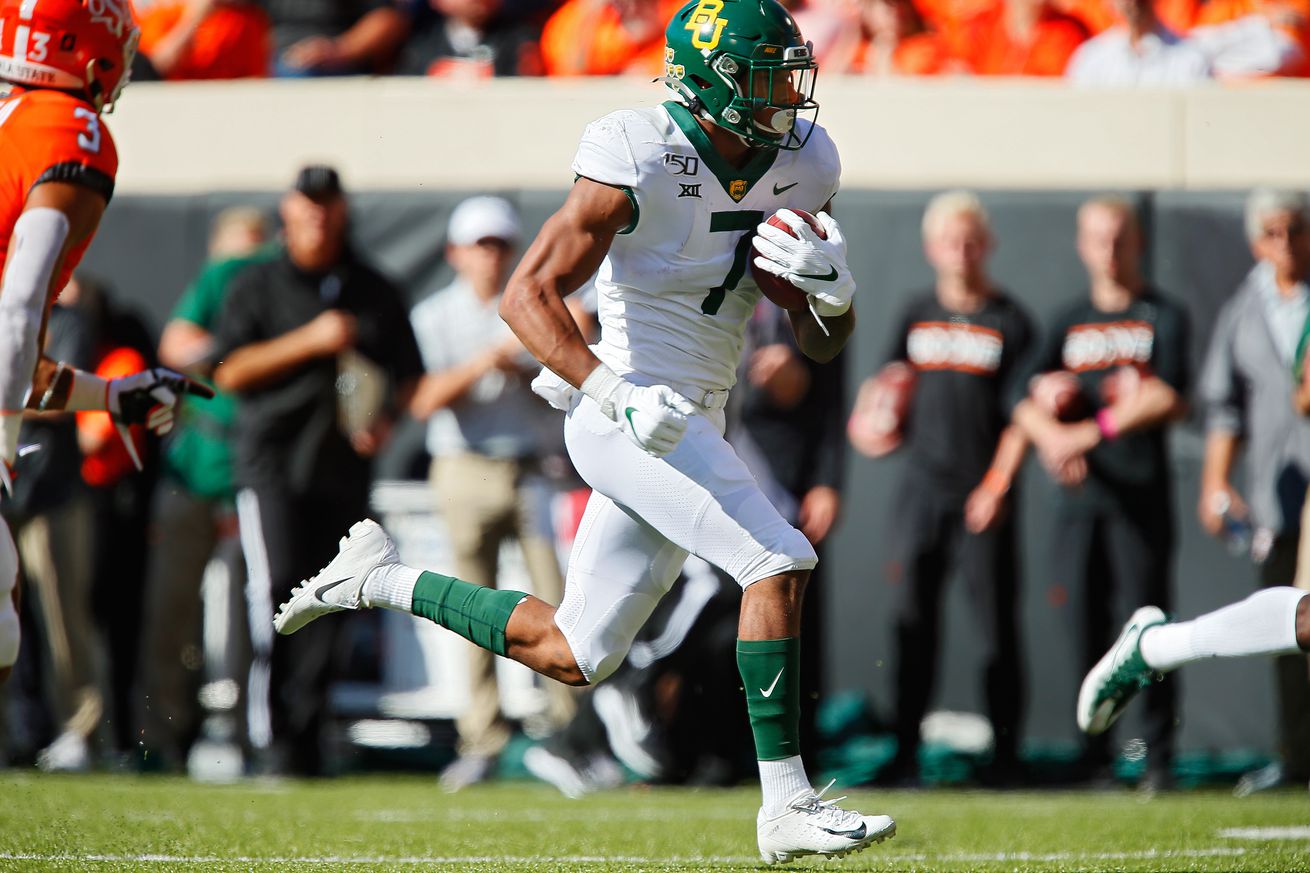 Photo by Brian Bahr/Getty Images
We’ve got Homecoming blues for the first time in a while. Here are this weeks’ three stars.

Another week, another frustrating loss.

It’s been the theme of the last two years: Compete in the tough games and fold in the winnable ones. Granted that Baylor Bears is undefeated and does deserve a lot of credit, there was a reason that Oklahoma State Cowboys was favored by four.

Playing at home, especially for homecoming, means something. It wasn’t even necessarily a terrible game, but the Pokes picked a terrible time to have the worst quarter of the season after taking a 27-24 lead just over two minutes into the fourth quarter.

The defense gave up 9.9 yards per play. Spencer Sanders turned the ball over multiple times for the fifth game in a row, Tylan Wallace was limited to under 70 yards and even Chuba Hubbard was held over a yard under his yards-per-carry average for the season. Somehow in all that, we’ll find our three stars as we do every week on thisherepost.


How can we not give it to him here? Hubbard carried 32 times for 171 yards and two scores and was one of the few bright spots on offense. At 5.3 yards-per-carry, Hubbard had a good game — just not quite the kind we’ve come to expect.

That’s also what you get when teams start realizing the greatness in front of them and start making an honest effort to make OSU beat them in literally any other way. The formula has been slow down Hubbard and worry about the rest later. With OSU having lost three of the last four... so far so good for the bad guys.


Sure! Why not! Brown only had four carries but one of those went for a 68-yard touchdown to give OSU a 27-24 lead in the fourth. Brown also caught two balls for 18 yards.

It’s not much but it’s something. OSU has been looking for someone — anyone — to be able to rely on to help keep our favorite Canadian’s carries down. Brown at least showed a flash of being able to be that back Saturday after not being able to get going for most of the year.


...who double as the three leading tacklers from this game. Stillwater’s second favorite Canadian in Amen Ogbongbemiga, along with Malcolm Rodriguez and Kolby Harvell-Peel have impressed me this season. For a defense that has its fair share of struggles, these guys have stood out.

Rodriguez has been one of the most sure-tacklers in the Big 12. Ogbongbemiga wasn’t a guy most people expected to be a major contributor but he’s stepped up big time during Calvin Bundage’s absence. And Harvell-Peel has improved on a good freshman year.

The trio combined for 16 of the Cowboys’ 42 tackles Saturday. While the numbers here don’t necessarily say much, these guys have impressed me this year. It’s also hard to find positives on the defensive side of the ball when Baylor ran for 224 yards and had another 312 through the air.


I’m not necessarily talking about the homecoming football game, just homecoming in general. It’s been one of my favorite things about OSU since I arrived on campus three years ago. Tons of universities will claim they’re the best at something (at least eight schools who claim “DBU” say what’s up), but I truly believe OSU hosts the best homecoming weekend in the nation.

I’ve seen and experienced first hand the amount of work that gets put into this weekend. I’ve heard from friends on homecoming steering that it’s truly a year-round event. That’s an absurd amount of work for what is at most a one-week event. But yet every year, the Greek community, dorm halls, student organizations, colleges and more put in the work to put this all together. And they’re rewarded with tens of thousands of alumni flooding back to Stillwater to relive their college days and appreciate all the hard work these people put in.

Fortunately Mike Gundy and the boys have been able to send the homecoming fans home with a win more often than not. My following of OSU doesn’t date back too far, but I know the football team has been able to win homecoming for at least four straight years until Saturday. Since my first homecoming game in 2016, OSU holds a 3-1 record with two wins against a top-10 ranked opponent: No. 10 West Virginia in 2016 and No. 6 Texas in 2018.

The financial, physical and mental investment that is put into this weekend is insane. That’s what makes it America’s Best Homecoming — no other school has been able to replicate it.