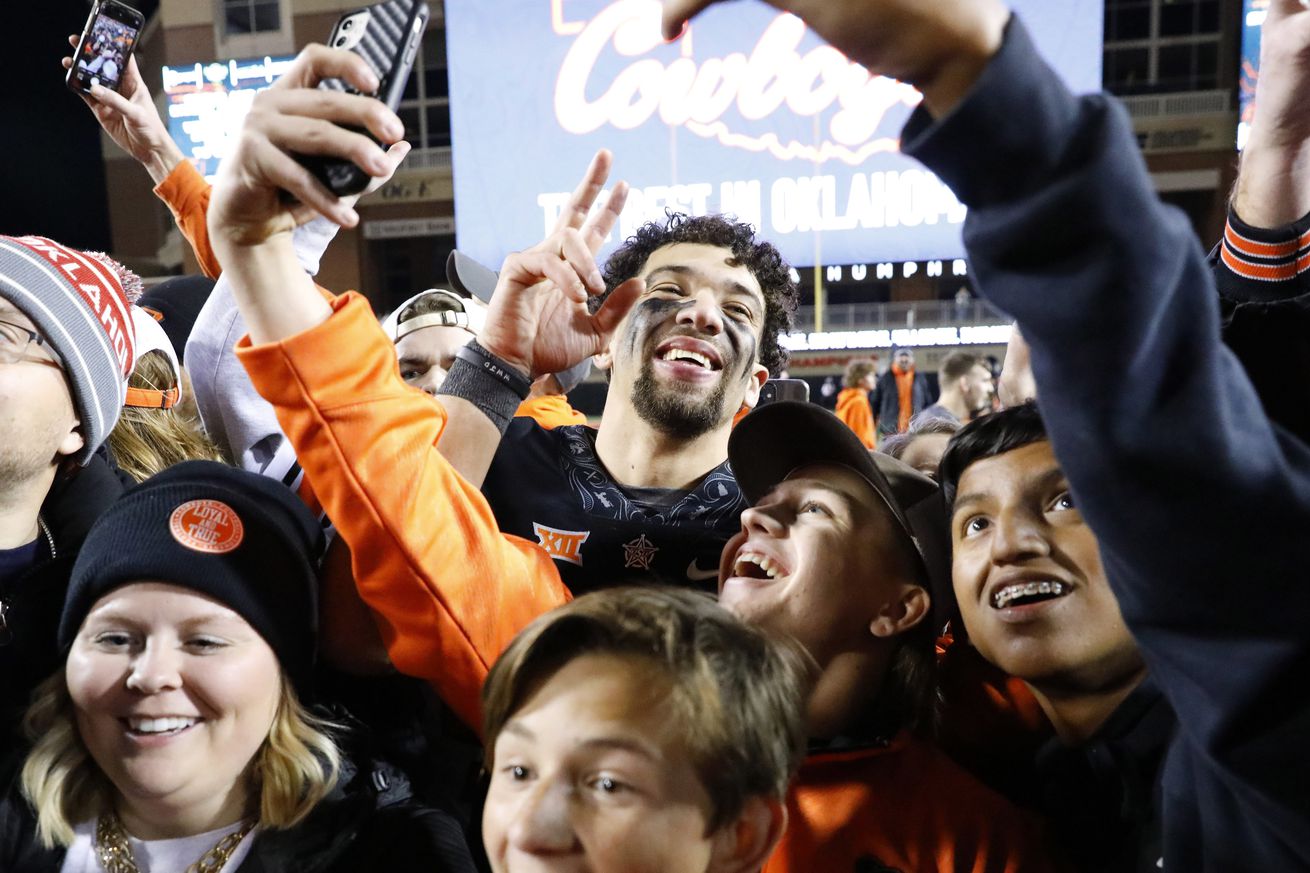 The Cowboys finish the regular season with an 11-1 record and will face Baylor in the Big 12 Championship Game.

Tyreek Hill forced overtime with an iconic punt return for a touchdown seven years ago in Norman in Oklahoma State’s last Bedlam win. Brandon Weeden quarterbacked the last Bedlam win in Stillwater 10 years ago. Those losing streaks ended on Saturday night in a Bedlam for the ages.

After putting that in perspective, having to wait three days to read our recap of the game doesn’t seem so bad! No. 7 Oklahoma State defeated No. 10 Oklahoma 37-33 to cap off a spectacular day of college football and thrust itself into the thick of the College Football Playoff conversation.

Bedlam was a back-and-forth affair and the final result was reached in a highly unusual way. Oklahoma State executed well to start the game with a Spencer Sanders touchdown pass that was perfectly placed to Tay Martin to open the game. The Cowboys answered an Oklahoma touchdown with a reverse to Tay Martin, who strolled into the end zone from four yards out.

The OSU defense got a stop on the ensuing possession but a roughing the kicker call on the punt gave OU an automatic first down. Sooners quarterback Caleb Williams found Austin Stogner for a touchdown on the first play of the second quarter to even the score at 14-14.

Just :15 seconds of game time later Brennan Presley crossed OU’s goal (so we could all sing Oklahoma State) after returning the ensuing kickoff for a touchdown. Oklahoma State led Oklahoma 21-14 with almost three full quarters left to play and it looked like Bedlam was heading for another classic shootout. OU and OSU traded field goals on the two ensuing possessions to bring the score to 24-17 midway through the second quarter.

Oklahoma punted to Oklahoma State late in the second quarter and the Cowboys had a chance to go up two scores before halftime. Instead, Spencer Sanders threw an interception that OU returned deep into OSU territory. Sanders played well for most of the night but that interception not only prevented OSU from having a chance to score before halftime but also gave OU a golden opportunity to tie the game. The Sooners capitalized and the score was tied at 24 at the break.

Things really got weird in the second half. The Cowboys defense played well in the first half, only giving up one real touchdown drive. The other two came on the Sanders interception and the roughing the kicker call to set up OU with a short field. Oklahoma State opened up the half giving up a safety on a Dominic Richardson fumble and then a touchdown on a Brennan Presley muffed punt.

Oklahoma State wasn’t able to get anything going on offense in the third quarter thanks to another interception and a missed field goal and trailed OU 33-24 to start the fourth quarter. The Cowboys first drive of the fourth quarter ended in Spencer Sanders eluding defenders for 37 yards on an option play for a touchdown. Sanders led the Cowboys in rushing with 93 yards and the score on 16 carries.

After the two defenses traded stops, it was Oklahoma’s turn to muff a punt as Eric Gray fumbled a punt in the same spot Presley muffed his punt. That set up a short touchdown run from Jaylen Warren to put Oklahoma State ahead for good. The Oklahoma State defense ended the game with three stops to seal the Bedlam win for the Cowboys.

Collin Oliver, Devin Harper, Malcolm Rodriguez and Tyler Lacy deserve a special shoutout for their work in putting pressure on Caleb Williams all night long. The Oklahoma State defense ended the game with six sacks and if Williams wasn’t so big, the Cowboys could have doubled that total. The team as a whole deserves a shoutout for not folding after falling into a nine point hole in the third quarter. This game might not have been close if the Cowboys hadn’t had so many self inflicted wounds. On the other hand, OU could have won the game without a few self inflicted wounds. In the end, it was Oklahoma State coming out on top and putting itself squarely in the College Football Playoff conversation.

The College Football Playoff rankings will come out Tuesday night at 7:00 on ESPN. Oklahoma State should move up to No. 6 at the least. The Cowboys could leap frog Notre Dame for No. 5, but likely won’t be ranked any higher than that. Wherever the Cowboys land, OSU fans shouldn’t worry about it. Oklahoma State has a shot to add another top 10 win to its resume on Saturday in the Big 12 Championship Game against Baylor. Notre Dame won’t play this weekend and Cincinnati’s conference championship game comes against a Houston team currently ranked at No. 24.

There’s also precedence for a team making a big jump over other teams on the last weekend of the season. Baylor and TCU fans were on the wrong end of that equation when Ohio State jumped both for the No. 4 seed in the inaugural College Football Playoff back in 2014. None of that matters if Oklahoma State doesn’t beat Baylor this weekend. That being said, Georgia and Alabama are probably the only other two teams with a shot at adding a more quality win than Oklahoma State, and Georgia will be in the Playoff regardless.