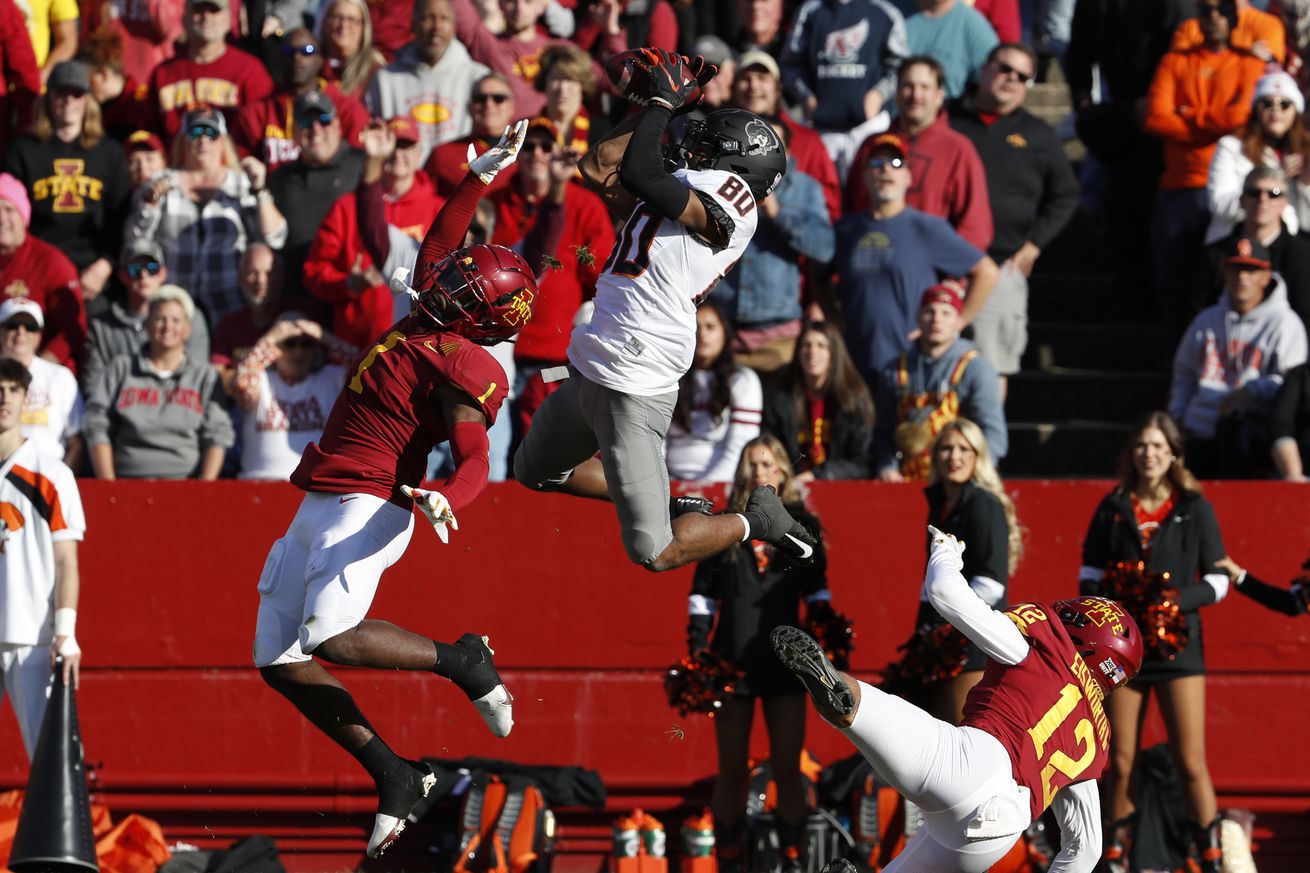 We are less than six weeks away from Selection Sunday in college football and like most of the conferences, the Big 12 is up for grabs.

It appears that there are four teams that stand out above the rest, Oklahoma, Oklahoma State, Iowa State and Baylor. The latter three each have one conference loss. Oklahoma has yet to play the other three schools in the race to Arlington, but the other three have played each other.

As of now, there’s a 3-way tie for second and if all three win out, there’s a 2008-like scenario where three teams are fighting for two spots and the tiebreaker is potentially who’s ranked higher in the CFP Rankings.

While this scenario is unlikely, it’s still entertaining to talk about. Which is why I love writing these. Here are my Big 12 bowl projections for this week!

Look, it is very easy to bump the Sooners out of the playoff picture after trailing Kansas for most of the game. But they still won, and they’re currently undefeated. I currently have them at number three in my CFB rankings, behind Georgia and Cincinnati. Cincinnati is at number 2. Despite terrible showings in games against 1-6 Tulane at the beginning and against 1-6 Kansas this week. They are still favorites to win the Big 12 and will probably will be until they lose. (If they lose of course) Good news: They play Texas Tech this week and get a bye. Bad news: After the bye, they play at Baylor, Iowa State in Norman and Oklahoma State in Stillwater. Oklahoma’s gauntlet begins soon. They’ll have to put up or shut up in those games.

So here’s the situation, the Cowboys lost and are tied for 2nd in the Big 12 standings with Baylor & Iowa State. The way I have decided the way to determine who goes to a better bowl game is currently based on the AP Poll, but will probably be based on CFP Rankings later down the line. Oklahoma State was ranked 15th, Baylor was ranked 16th and Iowa State was ranked 22nd. So for now, for the third straight week, The Sugar Bowl matchup is the Cowboys taking on a different kind of Crimson, the Crimson Tide.

Baylor built up its resume over the weekend with Iowa State defeating Oklahoma State this week and is in a very good position to win the Big 12. They were predicted to finish 8th in the Big 12 Preseason poll and are currently 6-1 so bravo to them for making it this far and looking like a contender already. The Pac-12 is an absolute mess right now, Oregon State is somehow 5-2 so they’ll go here for now. I have no doubt in my mind that this will change by next week though.

That describes Iowa State right now. Despite two early losses in September, Iowa State remains undefeated in “Brocktober” and only has one conference loss. They’re still in contention for the Big 12 and they can also move up or move down depending on how November goes for The Cyclones. I have Pitt going to the Cheez-It Bowl for now. The Panthers look really good right now and can very easily win the ACC Championship, but they remain here for now.

Fresh off a bye, The Longhorns look to get back on track at Waco this week and Ames next week. If they pull off the upset in both games, they instantly jump back into the mix to get into the Big 12 Championship game. For now, however, they’re a distant 5th place in the standings. Mississippi State, who are also upset-minded this week as they host 12th ranked Kentucky, meets them in Houston in the Texas Bowl.

Kansas State came back from 14 down at halftime to shut out the Red Raiders in Lubbock and win 25-24. Sitting at 4-3 with TCU, Kansas, West Virginia, Baylor and Texas remaining on the schedule. The Wildcats look to be in prime position to gain bowl eligibility. Arkansas has a bye after blowing out Arkansas-Pine Bluff in Little Rock and is currently 5-3 with games with Mississippi State, LSU, Alabama and Missouri. They can finish anywhere between 8-4 and 5-7. Odds are they split the next four and head to Memphis with a 7-5 record.

Texas Tech- They are 5-3, fired their head coach yesterday, and have to face arguably the top four teams in the Big 12. They could spoil a season for one of those four and clinch bowl eligibility but I think it’s very unlikely.

West Virginia- They defeated TCU, which puts them on the right track, however, The fellas from Morgantown have big home games against Iowa State and Oklahoma State the next two weeks. However, I just do not think this West Virginia team is that good.

TCU- With the loss to West Virginia, TCU sits at 3-4 with games vs Kansas State, Baylor, Oklahoma State, Kansas and Iowa State and need to win three of those games. Other than Kansas, all of those games are tough for the Horned Frogs and I do not trust them to win three or more games.

Kansas- We thank you for attempting to blow up the college football world trying to beat Oklahoma. But The Jayhawks are 1-6 and there’s no way they win their next five.