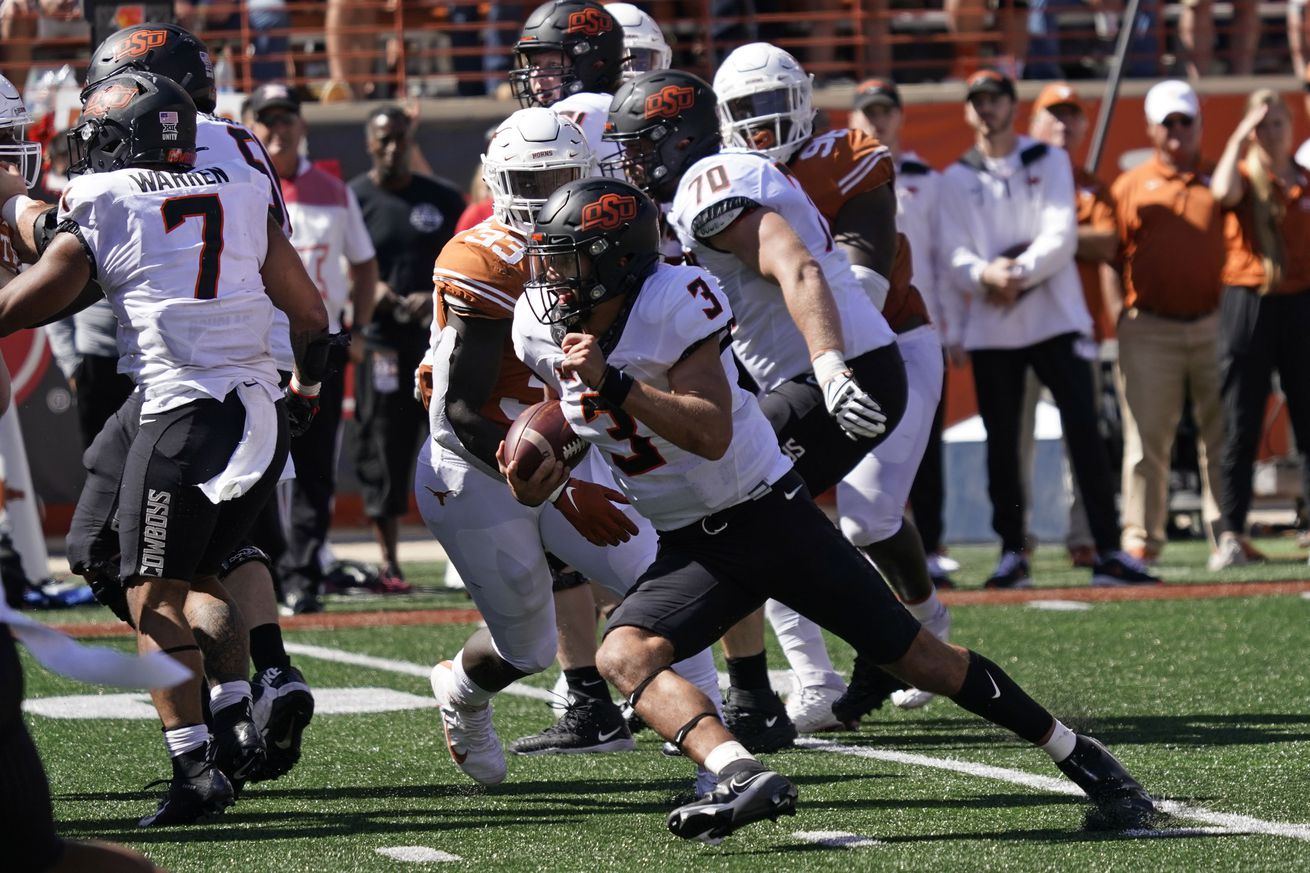 Tallysight helps the CRFF staff predict what will happen across the college football slate this weekend.

At first glance the week eight college football slate looks rather thin. There are no ranked matchups and some of the nations best teams are off this weekend. College GameDay is in Los Angeles, CA as UCLA hosts No. 10 Oregon. As if there weren’t enough going on in LA this week with the Los Angeles Dodgers facing the Atlanta Braves in the National League Championship Series and the Los Angeles Lakers and Clippers tipping off the 75th season of NBA basketball.

There are a handful of matchups similar to UCLA’s with Oregon. Chip Kelly had UCLA ranked early in the season before losses to Fresno State and Arizona State. Although the Bruins have fallen out of the AP Top-25 Poll, UCLA is still a competitive football team that could climb back into the rankings with a win and send conference foe Oregon tumbling at the same time.

Iowa State is in the same situation in the Big 12. Losses to Iowa and Baylor sent the Cyclones tumbling out of the AP Top-25 Poll after being ranked in the top-10 to start the season. A showdown with No. 8 Oklahoma State at home could setup the Cyclones to make a run in the Big 12 and climb back into the rankings. With that being said, let’s take a look at the Big 12 slate and preview the best games around the nation.

Oklahoma State just keeps winning. The Cowboys were underdogs on the road last weekend at Texas and pulled out a 32-24 win after a slow start. That brings OSU’s record to 6-0 halfway through the season. Iowa State is 4-2 and opened conference play with a 31-29 loss to Baylor on the road. On the bright side for the Cyclones, Baylor has made that loss look better and better as the weeks go on. The Bears only loss this season in currently to Oklahoma State.

Iowa State star running back Breece Hall got off to a slow start this season (by his standards, anyway) but has turned it around and strung together some impressive performances. Hall went for 197 yards and two touchdowns in the Cyclones 33-20 win over Kansas State last week. Brock Purdy has also improved after a rough start to the season. Purdy passed for 208 yards and a score on 22-of-25 last week.

The strength of both of these teams so far has been defense. Iowa State and Oklahoma State are both ranked top-20 in the nation in total defense and OSU has been exceptional at getting off the field on third down. This game isn’t likely to be a classic Big 12 shootout. Ian and Ingalls are both picking Oklahoma State to remain undefeated (check out this week’s podcast for more) but I am going with Iowa State by a field goal. This is a coin flip that could go either way. I’m picking Iowa State because it is the home team and because it needs a win to remain in contention for the Big 12 Championship Game. A loss would all but eliminate the Cyclones.

Oklahoma looks like a completely different team under freshman quarterback Caleb Williams. The Sooners once again appear to be the favorite to win the Big 12 Championship Game and advance to the College Football Playoff. A theme for OU, even during the Baker Mayfield, Kyler Murray and Jalen Hurts eras, was that it would lose a game that it shouldn’t every year. Could this be the year Oklahoma finishes the regular season undefeated?

One thing is for sure- the Sooner’s undefeated record will live to see next Monday. A road trip to Kansas to take on the Jayhawks is on the schedule for Oklahoma this weekend. Kansas has had an absolutely abysmal season and that will continue on Saturday.

Oklahoma will improve to 8-0 (5-0) this weekend and hosts Texas Tech the weekend after that before taking a bye week to prepare for a tough stretch to end the season. Oklahoma will face Baylor on the road and Iowa State at home before concluding the season against Oklahoma State in Stillwater. Our staff has Oklahoma routing Kansas on Saturday. Kickoff is set for 11 on Saturday morning on ESPN.

This game has the potential to be a great matchup. Kansas State is 0-3 in Big 12 play but has faced Oklahoma State, Oklahoma and Iowa State so far. Those are three of the top four teams in the Big 12. The Wildcats desperately need a win against a Texas Tech squad that is 2-2 in conference play with wins over two squads that are 0-3 in Big 12 play thus far in West Virginia and Kansas.

Texas Tech’s passing attack has really struggled over the last few weeks. The Texas Tech defense was gashed in Big 12 losses to Texas and TCU. The Red Raiders face a more competent opponent this weekend and will need the passing attack to be better than it has been over the last three weeks.

Our staff has Kansas State notching its first win in Big 12 play this season and covering a rather slim spread. I picked the Wildcats to beat Texas Tech 33-28 and I expect this one to be a one score game. Kickoff is set for Saturday morning at 11 on FS1.

TCU has had a much more successful start to conference play than West Virginia has, even is the difference has only been one win. The Horned Frogs scored 52 points in a win over Texas Tech and played Texas close at home. TCU lost to Oklahoma 52-31 on the road last weekend without star running back Zach Evans. The Horned Frogs offense still looked good for the most part, but the defense couldn’t slow down Caleb Williams.

Regardless of if Evans (listed as probable to play by coach Gary Patterson) plays or not, TCU should have no problem hanging points on West Virginia. The Mountaineers will need to score more than 20 points in order to win this one. Aside from a 66-0 win over Long Island, West Virginia’s season high for points scored is 27 in a win over Virginia Tech. 27 points is the least amount of points TCU has scored in a game this season.

I have TCU winning over West Virginia with relative ease. Ingalls and Ian agree with me in that TCU will win, though Ingalls did pick West Virginia to cover a four point spread.


Games Around the Nation

As I mentioned above, the slate of games across the nation is rather thin this weekend. Of course, we could get a bunch of upsets and great games, but the slate isn’t inspiring at first glance. The UCLA- Oregon game is intriguing and Oregon is on potential upset watch. No. 12 Ole Miss hosts LSU as coach Ed Orgeron appears in his first game since being ousted as LSU’s coach. No. 4 Alabama hosts a Tennessee squad that looks to be much improved from year’s past. No. 24 UTSA plays at Louisiana Tech in its first game as a ranked team in school history. No. 13 Notre Dame and USC renew a century old rivalry in South Bend on Saturday night. Here are some of our picks around the nation.