So not only did they cancel on Houston less than 24 hrs before the game, they canceled because they had suspended an OL man that then put them below the min 7 OL men limit.
So Basically they didn’t want to play at risk of losing to Houston with some starters out.

sounds like chicken sh-t move to me, gaming the system


Baylor, Houston and the cancellation complications that aren’t going away 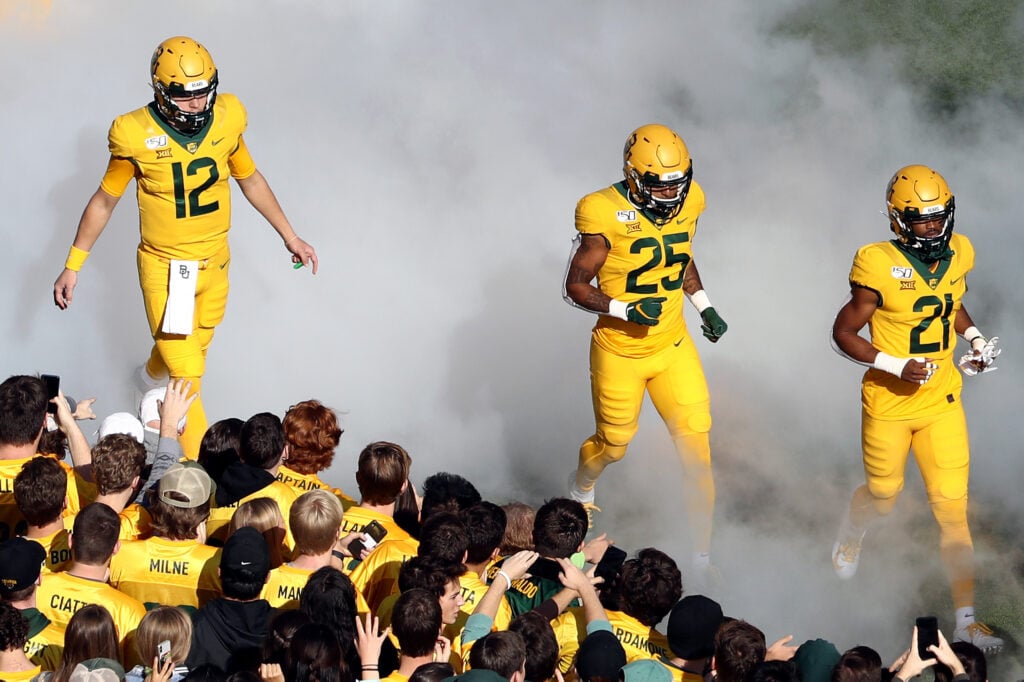 By Max Olson 1h ago

Houston was ready to hit the road. The Cougars had a 72-man travel roster of players fired up to get their season started. The program performed 175 COVID-19 tests on Friday morning. All 175 came back negative. Five buses awaited their departure. Their equipment truck was already parked at McLane Stadium in Waco.
The team was scheduled to board the buses and leave campus at 4:15 p.m. They were in the middle of meetings at around 12:15 when Houston coach Dana Holgorsen found out. Baylor had called off the game.
It took just three weeks of this season for the first Friday cancellation involving a Power 5 team to occur. Sure, it was just a nonconference game, one that was hastily scheduled in the first place. But how it went down just might foreshadow several issues the rest of the college football world will confront in the weeks ahead.
So what really happened? Well, it’s complicated.
Baylor canceled the game midday Friday after determining a shortage of offensive linemen made it impossible to safely play the game. The Big 12 requires its teams to have at least 53 players available to play and at least seven offensive linemen, four interior defensive linemen and one quarterback. Baylor athletic director Mack Rhoades has acknowledged one of those positional standards wasn’t met but has declined to cite which one.
Fox Sports analyst Joel Klatt was in Waco on Friday for a scheduled production meeting with Baylor coach Dave Aranda when the cancellation was finalized. During a radio interview Monday, Klatt revealed that Baylor was down to six available offensive linemen that day.
For both sides, the cancellation was a deeply disappointing setback. The reason Baylor had called Houston in the first place to set up this Sept. 19 game was that both teams had already dealt with postponements that had prevented their seasons from starting on time. At Baylor, the mood after this latest cancellation was one of dejection. At Houston, it was more frustration and anger.
On Monday, Holgorsen said he’s ready to move on to the next first game and has put the Baylor cancellation behind him. “It’s 2020 and we’re used to this crap,” he said, “so we’re gonna get ready to go play North Texas.” But he did offer one parting shot, one frustrating detail that was hard to get past on Friday.
“You know, I don’t know how it gets to 22 hours before the game,” Holgorsen said. “We’ve had four games canceled, so we’re kind of used to that. How it gets to 22 hours before the game, I don’t know. I mean, there’s a reason why our conference and the Big 12 test three times a week. So I would think that our opponent kinda knows where they’re at just like we kinda knew where we were at.”
What Holgorsen is alluding to is something that’s sure to arise again over the course of this unpredictable season: transparency. Why wasn’t Houston aware of Baylor’s offensive line issues until Friday?
The Bears performed testing on Sunday, Wednesday and Friday. The two programs had medical calls throughout the week to share updates. Houston athletic director Chris Pezman got no warning about any concerns on Baylor’s end until he received a text message from Rhoades on Thursday night. The next day, Baylor backed out. And that left many at Houston feeling blindsided.
As one Houston source put it, “If we knew we had a problem, we would’ve been transparent and said we’ve got some positives, we’re maybe short on offensive linemen, we got this conference deal that may sneak up on us on a position, here’s where we’re at.”
Pezman didn’t hide his frustration in the statement the school sent out Friday. His message: Houston did everything right. Baylor didn’t. “We’re extremely disappointed for our student-athletes, coaches and staff. They all have consistently done the right thing and worked tirelessly to be prepared for this game,” Pezman said. “We appreciate their dedication to adhering to not only the American’s testing protocols, but the Big 12’s as well. With our student-athletes’ commitment to doing the right thing, we remain ready to play.”

Hmm interesting. So if the game wasn't played, then technically this O lineman has not served a suspension yet, meaning that he should be suspended for their next game. So they could have let him play vs Houston then suspend him vs Kansas which he should be anyway.

Can't really criticize a coach too much for not lifting a suspension, saying it is bad for discipline. But if the coach considers the Houston game the suspension, he gives up that high road.

CocoCincinnati said:
Hmm interesting. So if the game wasn't played, then technically this O lineman has not served a suspension yet, meaning that he should be suspended for their next game. So they could have let him play vs Houston then suspend him vs Kansas which he should be anyway.

Can't really criticize a coach too much for not lifting a suspension, saying it is bad for discipline. But if the coach considers the Houston game the suspension, he gives up that high road.
Click to expand...
Or he had guys out and knew he would lose. Then he "suspended" a lineman. Just to get out of the game and not get his ass kicked.
B

I guess I don't get why the protocol is rigid & requires 14 days, even with multiple negative tests. If a guy tests positive, then tests negative 2 or 3 times in a row, how do they know it wasn't a false positive to being with?
You must log in or register to reply here.
Share: Facebook Twitter Google+ Reddit Pinterest Tumblr WhatsApp Email Link