Iconic businessman and Oklahoma State mega-donor, T. Boone Pickens, died Wednesday at his home in Dallas, Texas. He was 91.

Pickens was born May 22, 1928, in Holdenville, Oklahoma in the first-ever c-section in that town’s hospital. He attended high school in Amarillo, Texas, and went to Texas A&M for a year before losing his basketball scholarship and transferring to Oklahoma A&M. He graduated with a geology degree from now-OSU in 1951.

Texas A&M’s 12th Man Magazine once included A&M’s decision not to renew Pickens’ $25-a-month basketball scholarship as one of the top 10 mistakes in Aggie history (a long and storied history).

Pickens worked for Phillips Petroleum for three years after college. In 1954, he formed Petroleum Exploration Inc., which focused on domestic oil and gas opportunities. He then formed Altair Oil & Gas Co. to pursue oil and gas exploration opportunities in western Canada.

Those companies came before Mesa Petroleum, a company Pickens took public in 1964. Between 1964 and 1996, Mesa produced more than 3 trillion cubic feet of gas and 150 million barrels of oil.

He became famous in the 1980s as a businessman and started to take on political recognition, even briefly considering running for United States president in 1988. Eventually he sold Mesa in the mid-1990s and started BP Capital Management in 1997.

Over the years, Pickens has donated more than $500 million to Oklahoma State, his alma mater. Pickens gave $70 million to OSU in 2003 for both athletics and academics. At that year’s OSU-Wyoming game it was announced that Lewis Field would be renamed Boone Pickens Stadium.

That donation also spurred OSU’s Next Level campaign, which generated more than $100 million in gifts and pledges and led one principal of a national consulting firm to call it “one of the most successful, well-run athletic campaigns I’ve ever seen in 30 years of consultations for more than 100 universities.”

Pickens’ largest donation came a few years later in 2006, when he gave $165 million to completely renovate Boone Pickens Stadium. That donation is the single largest gift for athletics in NCAA history, and the way it went down was legendary, according to Pickens in his book, The First Billion is the Hardest (which, we should add, is a book title that led to one of the great exchanges in Twitter history). 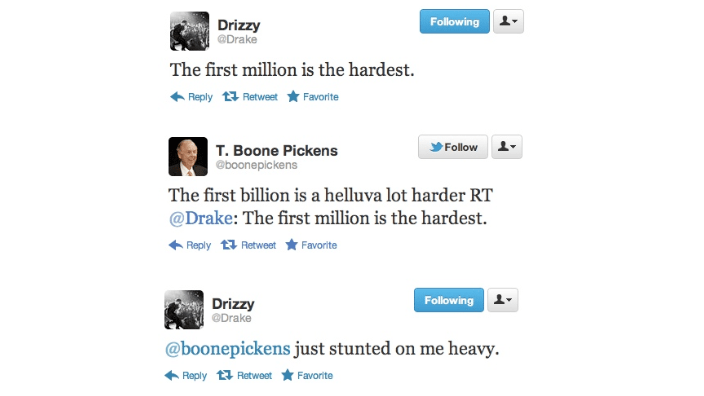 Anyway, here’s Pickens recounting how the $165 million came to pass.


On the day we all met in my office, Mike [Holder] showed me the spreadsheet he had prepared indicating how much it would take to build the stadium.

And that was that. Burns [Hargis] couldn’t believe it. He thought I was bullshi***** them. Holder knew I was serious. [The First Billion is the Hardest]
​
Amazing.

“This isn’t just about football or basketball or our major sports,” athletic director Mike Holder said about the announcement of Pickens’ $165 million. “It’s about every sport, giving every coach here and every athlete here the opportunity to strive for excellence.”

Pickens also gave millions more in the ensuing years, and his $652 million in gifts is split between academics and athletics. OSU’s geology school is called the Boone Pickens School of Geology.

“Boone didn’t just build a football stadium in Stillwater,” said Tom Coburn, former Oklahoma senator. “He empowered academic excellence at Oklahoma State. The philanthropy is just an extension of who Pickens is.”

He obviously became beloved in the OSU community. The trinitarian leadership of Holder, Gundy and Hargis during the golden era of OSU athletics has been empowered by Pickens and his money and clout. Might all of this have happened otherwise? There’s a chance, but Pickens likes surer bets.

“He was just an old country boy from Holdenville, Oklahoma, but he could think his way around any Noble Prize winner,” Hargis once said. “Boone was a legend, a change agent, a life force that rarely comes along.”

Pickens’ philanthropy didn’t stop at OSU, either. Throughout his life, Pickens gave nearly $2 billion through innovative matching initiatives to various entities — including Oklahoma State — for causes such as health and medical research, treatment and services, entrepreneurship, and at-risk youth. Pickens donated $7 million to the American Red Cross in 2005, the largest individual contribution in the organization’s history.

“I firmly believe one of the reasons I was put on this Earth was to make money, and be generous with it,” Pickens once said. “And that’s what I’ve continually tried to do.”

Pickens went into hospice care at the end of last week and was surrounded by family and friends early this week before passing away on Wednesday. His legacy will reverberate for decades in so many different industries. Memorial services are being planned and there will at some point be a celebration of his life in Stillwater. He will be buried in Stillwater.

The post T. Boone Pickens Passes Away at 91 appeared first on Pistols Firing.