You didn’t ask for this, but I’ve done the leg work and have this thing I need to get off my chest anyway. Let’s take a dive down the rabbit hole and review foul rates.

This is an idea spawned from hours on our forum, The Chamber, where I often see (referencing no player in particular) that PLAYER X is always in foul trouble! or he fouls too much!

To review the merit of this argument, analytics are key. And by analytics, I mean basic math. Here are several things to know about foul rates.

1. The term foul rate is the frequency at which a player commits fouls, based on a 40-minute projection. Not all players play 40 minutes — most rarely do actually — but in a vacuum, college players are allowed five fouls per game.

2. Games are typically 40 minutes in length, though overtime or overtimes can extend the playing time. Fouls are obviously not given in excess to account for extra playing time.

3. Sometimes, players are foul prone. Too aggressive. Other times, they’re not aggressive enough. Based off what I’ve researched, the truth is that the bigger the player, the better chance that player has of fouling at a higher rate than other players.

With that said, here’s last season’s data from OSU’s roster (via KenPom). This is the number of fouls committed per player per 40 minutes of playing time.

• Yor Anei and Kalib Boone had the highest fouls committed per 40, at 6.2 and 5.8, respectively. But they arguably were the most important defenders for OSU last season. Anei had an 11.8% block percentage (the percentage of an opponent’s shots a player blocks) — which ranked 13th nationally — and Kalib Boone had an 8.1% block rate. No other player on OSU’s roster had a block percentage higher than 2.2. (Shouts, Avery Anderson and Keylan Boone.)

• Kind of incredible, but no player on the 2018-19 team committed more than 5.5 fouls per 40 minutes. (Anei committed 5.4 fouls per 40 as a freshman; Maurice Calloo was right there with him at 5.3. Kentrevious Jones, who played only 55 total minutes before being kicked off the team and thus was disqualified from my sample, committed 10.2 fouls per 40. (Yikes!)

• My biggest takeaway here is that Kalib Boone and Avery Anderson will need to improve as sophomores in the foul department. Boone is going to play big minutes and likely slots in as the starter at center, where he realistically will play around 30 minutes per game. If that’s the number, then statistically he’ll be in foul trouble every game (with a foul rate of 4.35 per 30 minutes). Same is true of Avery Anderson, though he’s not likely to play as big of a role in 2020 as Boone.

• Fouling is not a bad thing. I used to get in trouble for not fouling enough. In my case, I wasn’t being aggressive enough. But it’s nonetheless a consideration — a game within the game that affects the game — and a consideration OSU must keep a keen eye on next season.

• More context to my the bigger you are, the more likely you are to foul argument: KenPom’s data from last season shows that the best performers in this category — those that were least likely to foul — were almost all small. In KenPom’s list, the tallest player on the top-70 (!) was 6-foot-7. (Here’s a snapshot of the top-30.) 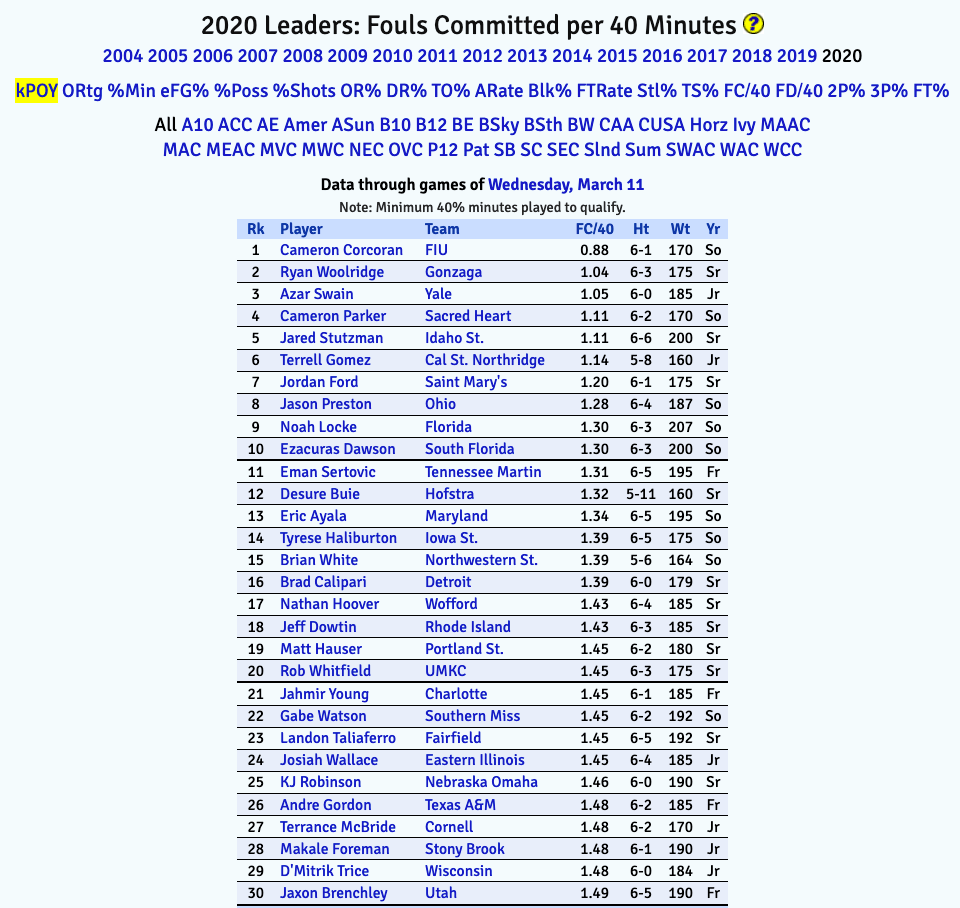