Another year, another glimmer of hope for Eddie Sutton.

The Naismith Memorial Basketball Hall of Fame announced its 2020 finalists on Friday, and Sutton is one of the names (among some very big names). The nominee list here is pretty insane.

Sutton has famously been kept out of the Hall over the past decade for various (ridiculous) reasons. This is the seventh time he’s been a finalist. He’s 0-for-6 so far.

There’s no great reason to think that this year will be any different. But as Bill Haisten wrote earlier this year when he profiled Fran Fraschilla’s thoughts on the matter, the entire thing is nonsense.


From a panel of 24 unidentified voters, a finalist must receive at least 18 votes. Accountability is not required of the voters. So, why hasn’t Sutton gotten at least 18 votes? There never has been an explanation from anyone at or connected with the hall of fame. Fraschilla says it’s “political.”

Naismith Hall of Fame membership would not be an act of charity. Sutton is not a bubble candidate. He had NCAA Tournament teams at Creighton, Arkansas, Kentucky and OSU. [Tulsa World]
​
Sutton was recently tied on the all-time wins list by Bob Huggins at 806. Coincidentally, Huggins was nominated earlier in this process for this year’s list, but he did not make it in as a finalist. Here’s your all-time top-10 wins list. Only Huggins and Sutton aren’t in. 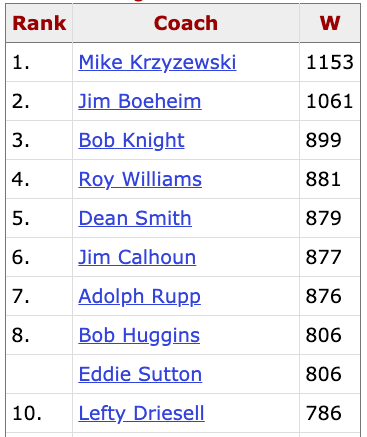 Let’s go back to Fran.

“If anyone votes against Eddie because he had an NCAA issue when he was at Kentucky, then more than a handful of coaches should be removed from the Hall of Fame,” Fraschilla told the Tulsa World.

“Even people close to the game don’t know how the Hall of Fame nominating and vetting process works. It’s a secret society. I’m an East Coast guy, and I feel strongly that through the years the Hall of Fame has been run mostly by people on the East Coast.”

Two thoughts on Hall of Fames in general.

1. Make all votes by all voters for all Halls of Fame public.

2. Don’t moralize. Put Bonds in. Put Rose in. Put that they cheated on their plaques. I don’t care. Halls of Fame are historical places, not bastions of moral high ground.

Who knows if this is finally the year for Eddie. It sounds like everyone thought last year would be the year. Either way, I think we can all agree with his most vocal former player Doug Gottlieb, who succinctly said on Friday, simply, “It is time.”