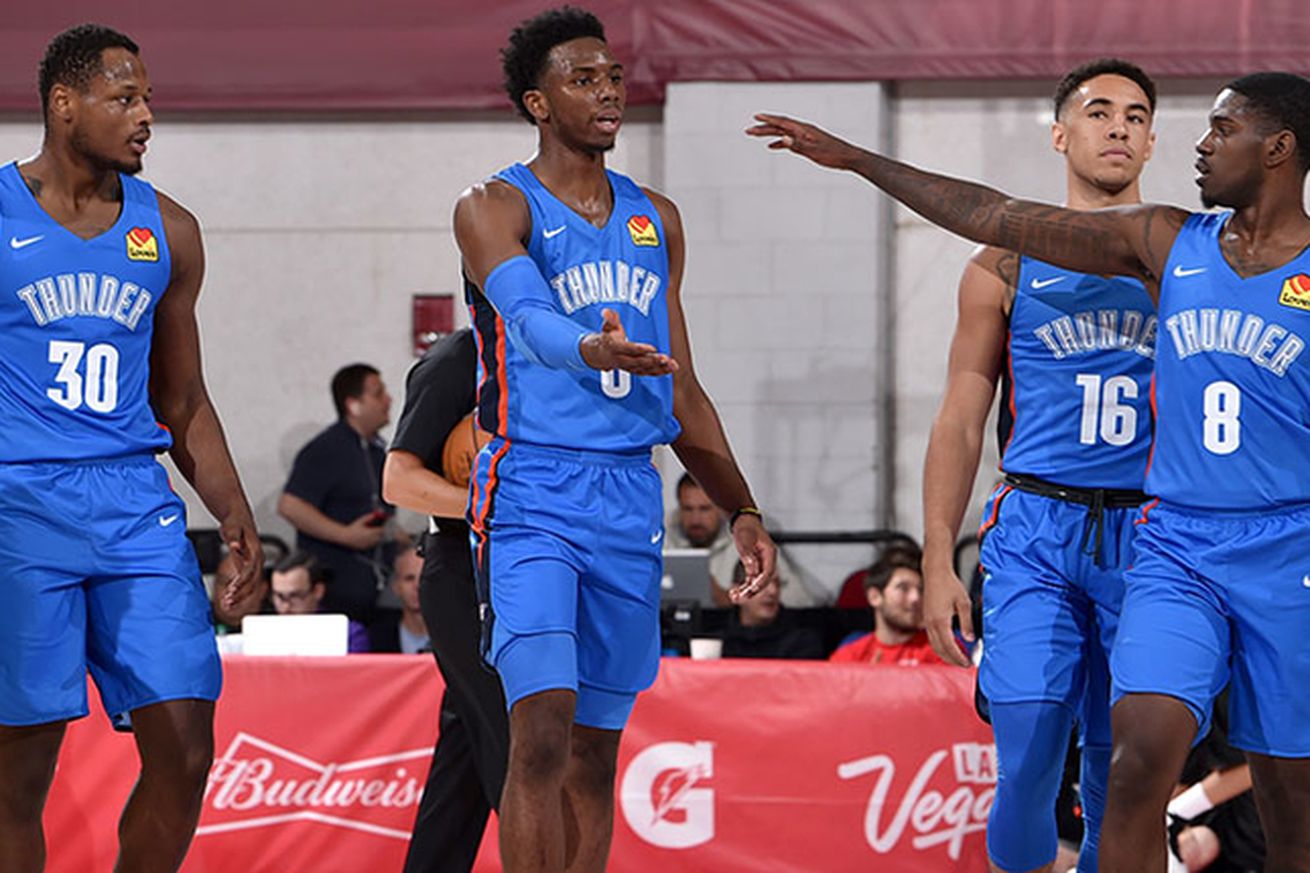 NBAE/Getty Images
The craziest free agency in NBA history is over and so is summer league. So what does next year look like for our three pro Pokes?

The NBA free agent class of 2019 was likely the most historic the league has ever seen, with nearly half of the entire league eligible for free agency. Not everyone has signed yet, but all the major players are off the board and the expected aftershocks of those moves (looking at you, OKC) are done.

With the dust settled, lets look at what next year could look like for Marcus Smart on a very different Celtics squad and recap Jawun Evans and Jeffrey Carroll’s summer league performances.


Boston recovered nicely from losing all-star guard Kyrie Irving by poaching fellow Eastern Conference all-star guard Kemba Walker from the Charlotte Hornets. It was originally thought that Boston would likely start Smart at point when it was all but assumed Irving was leaving. But Charlotte was reluctant to offer Walker a five year super-max deal worth near $221 million, and he decided to go to Boston on a max four-year $141 million deal.

The Walker signing was turned into a sign-and-trade when Celtics reserve Terry Rozier signed a three-year $58 million deal with Charlotte. Boston decided to bring back guard Brad Wanamaker on a minimum contract, leaving the guard depth as follows:

Walker will be tasked with most of the scoring load with Jayson Tatum coming next. Carsen Edwards was drafted in the second round, but Boston cleared cap space to sign him to more than the two year minimum, standard for second round picks. Edwards showed he can be a valuable shooter in summer league and will receive minutes this season.

Because Boston is thin on depth at forward, Tatum will likely play a lot of power forward. A lot of the minutes puzzle will also depend on how Gordon Hayward performs in his second year back from a devastating leg injury. If he returns to more true of form, coach Brad Stevens could elect to start Brown at shooting guard and Hayward at the three. This would push Smart to the bench, but one thing is for sure: one of Smart, Hayward or Brown will not start.


With Enes Kanter in fold, Celtics depth chart looks like:

— Chris Forsberg (@ChrisForsberg_) July 1, 2019​
My guess is that the starting lineup will flex as needed throughout the season, but Smart should get a consistent 30 minutes per night. Smart has averaged at least 27 minutes per game every year of his career and his defense will be invaluable on an offensively loaded team. The starting forwards will be Tatum and either Robert Williams or Enes Kanter; Williams is unproven and Kanter is a known defensive liability despite being an excellant rebounder.

Projected opening night starters are Walker, Smart, Brown, Tatum and Kanter. Hayward and Williams will have a chance to nose their way into the starting lineup throughout the season. Even if Smart winds up spending the season coming off the bench with Walker, Brown and Hayward starting, he’s pretty much a lock for 30+ minutes a night. I wouldn’t be surprised if he got 35+ based on the defensive needs of this team. Smart started 60 of the 80 regular season games he played in a season ago.


Evans struggled at times during the summer league, averaging 5.0 points on 36 percent shooting in four games. He did get decent minutes at 22.5 per game. Evans also had 3.8 assists and 3.0 rebounds per game. My guess is as good as yours as to if Evans gets a two way contract or if he will be a full time G-League player. One thing I was able to gather was Evans ran the offense well and showed potential even if his numbers weren’t necessarily good. But hey, defense!

— Max Carlin (@maxacarlin) July 6, 2019​
Evans excelled in the G-League last season, earning a two way contract with Phoenix will later waived him before he signed a two way deal with OKC at the end of the season. But with major turnover, who gets a two way contract is currently the least of GM Sam Presti’s worries.

A new season is upon us in OKC. If you haven’t heard, Kawhi Leonard decided he wanted to become a Los Angeles Clipper and he recruited Paul George to request a trade to the Clippers as well. This forced Presti’s hand and officially forced the first rebuild in franchise’s 11-year history. George was traded to the Clippers and Russell Westbrook was traded to the Houston Rockets. So what does this mean for Evans?

First off, the Thunder brought back two point guards in these trades; Shai Gilgeous Alexander from the Clippers and Chris Paul from Houston. OKC is presumably trying to trade Paul, but not many teams want the remaining three years and $124 million left on his contract, which takes his through his age 36 season.

Lets assume OKC can’t trade Paul and he’s too expensive to buy out. They’ll play him considerable minutes, but they’ll try and get at least 25 minutes a night for Gilgeous-Alexander, if not much more. That doesn’t leave many minutes for other true point guards. Trading Paul might be able to shake loose a few minutes for Evans if the Thunder choose to bring him back on a two way contract. Here are some thoughts on Evans from the Thunder’s official website with some insight from Presti as well.


Late in the Thunder’s 2018-19 campaign, the Thunder brought in former Oklahoma State University point guard Jawun Evans in on a two-way contract. The 6-foot, 190-pound Evans was a part of the Thunder’s scout team during the postseason series against the Portland Trail Blazers. General Manager and Executive Vice President Sam Presti called Evans, “an interesting player for us to look at,” and over the course of Summer League, the organization has gotten a longer look at the lead guard. Evans has started for the Thunder’s Summer League group, getting the team organized and playing with a quick tempo and pace.
​
My guess is Evans either signs a G-League contract with the OKC Blue, or the Thunder give him a two way contract. If it’s the two way contract, he could learn considerably from Paul assuming Paul would help him: it doesn’t seem like he wants to be in OKC to begin with and might not want to bother with it. If not, he can at least learn considerable drip skills from LeagueFits ROY Shai Gilgeous-Alexander.


some were made to disrupt the status quo. no surprises on the 2019 rookie of the year. pic.twitter.com/xzB8MbZIP5


If you weren’t impressed by Jawun’s numbers then you won’t be impressed by Jeff’s either. Clip averaged 5.7 points on 31 percent shooting and 12.7 minutes per game in three games in Vegas. Unlike Jawun’s “numbers don’t reflect his performance” showing, Jeff got, uh, less than glowing reviews.

Injury derailed his SBL season last year but he's also not particularly good. I expected sweet shooting and bad D and mostly got bleh shooting, bad D, and really bad decision-making. He might end up back w/SBL as a body but not a prospect of note.

— Ben Rosales (@brosales12) July 14, 2019​
After acquiring Anthony Davis, the Lakers were able to fill in the holes around him and LeBron James with average to above average players but they’ll be short on depth. It doesn’t currently look like Carroll will get a chance to be an end-of-the-bench or two way guy for the Lakers after a lackluster summer league performance. The best hope for him next season is to get better and stronger in the G-League after suffering an injury last season and hope he gets a shot somewhere else in the league on a thin roster potentially in 2020-21. If not, he would be a more than serviceable player overseas.