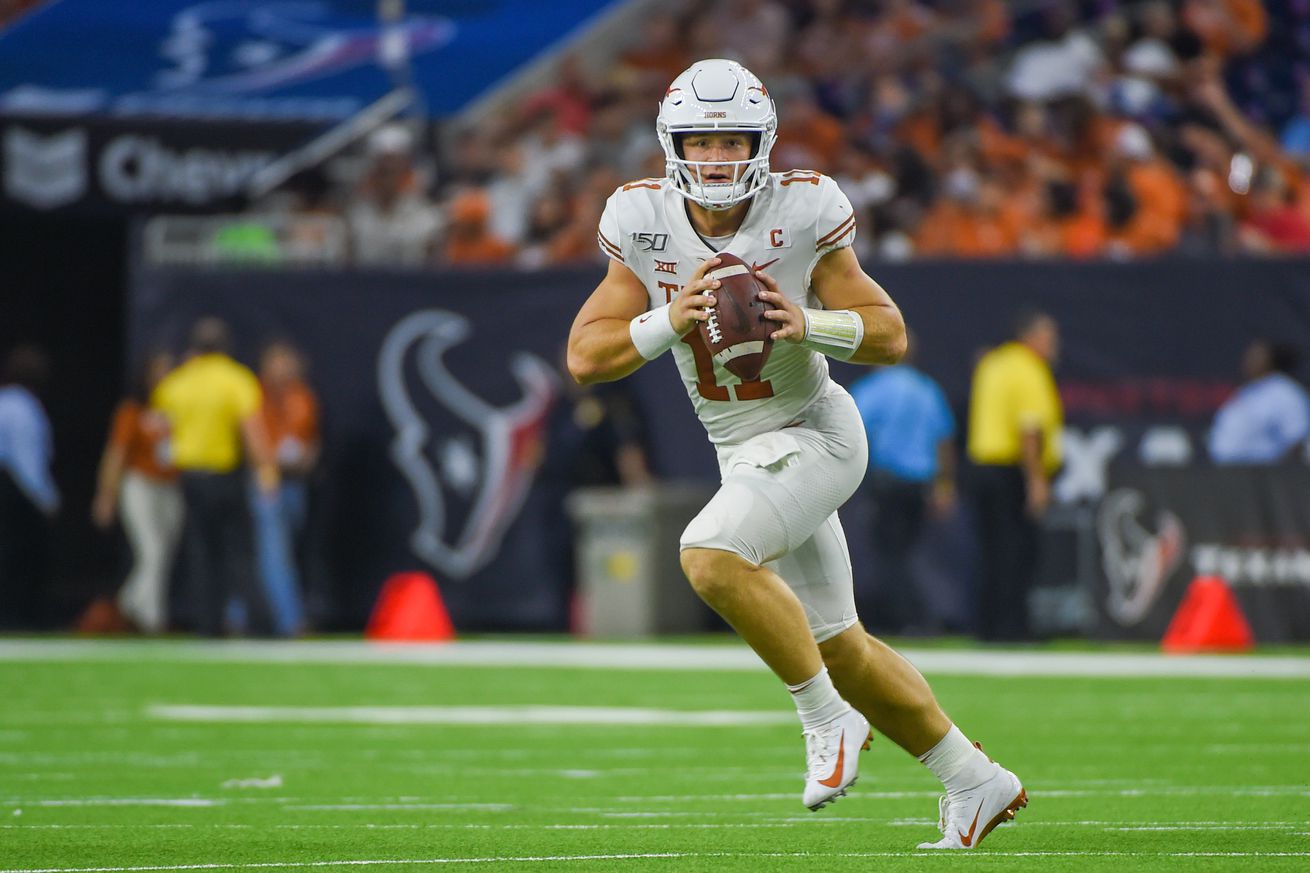 Photo by Ken Murray/Icon Sportswire via Getty Images
Here are the players to keep an eye out for when Oklahoma State takes on Texas.

This edition of players to watch features the younger brother of a former OSU standout, the cover of Dave Campbell’s Texas Football and more. Here are a few players to look out for when Oklahoma State takes on Texas.

Eight months ago Ehlinger planted a flag at midfield of the Sugar Bowl in New Orleans and told Texas fans “we’re back” over the PA system after a win over Georgia. Now he has to make sure Texas takes care of business and avoids a 2-2 start.

On the cover of this year’s edition of Dave Campbell’s Texas Football, Ehlinger poses for the camera accompanied by the caption “Sam Ehlinger hears the hype and the hate. He’s ready.” Well we are about to find out if he was actually ready.

So far, the Horns have faced Louisiana Tech and Rice, as well as LSU. Ehlinger has looked good in all three games. He passed for 401 yards and four touchdowns against LSU and has yet to throw an interception. Because the run game has struggled so much, Texas’ offensive production will fall squarely on Ehlinger’s shoulders.

This group hasn’t been good at all this season. I am only putting them on players to watch because if they can’t get it going against a young front seven for OSU, it will make the Texas offense just a little easier to defend.

Freshman Jordan Whittington was supposed to be the star of this group, but he suffered a groin injury in week one that will keep him sidelined another few weeks. Keaontay Ingram is the most experienced of the group, but he hasn’t been special either. He averaged just 2.9 yards per carry against LSU. He played better against the other schools, but nothing to raise an eyebrow at.

Colin Johnson is the best of the group and the only Texas pass catcher who figures to get drafted next season, but Texas has a deep receiving corps of younger guys behind him. Duvernay and Eagles have been two of Ehlinger’s favorite targets so far this season. Against LSU, Duvernay led in receiving with 154 yards and two score while Eagles was right behind him with 116 yards and a touchdown.

The Texas receiving corps is a pretty big group. Duvernay is on the shorter end of the bunch but has blazing speed. If the OSU secondary can slow down or limit some of these guys, it would be a tremendous help. If not, Ehlinger will liekly pick apart the secondary all night, unless the front seven gets pressure.

The Texas secondary got TORCHED against a talented LSU offense. Again, a lot of people seem to want to talk about how LSU is traditionally a running team to discredit the Texas defense even further, but LSU can throw the ball around now. The Tigers finally have a competent enough quarterback to do so.

One of the leaders in the secondary is Caden Sterns, younger brother of former OSU standout Jordan Sterns. Among the more concerning stats in the Texas secondary is the lack of turnovers forced, especially against the weaker teams Texas faced. Linebacker Joseph Ossai has two interceptions on the season to lead the team.

Texas ranks 62nd nationally in points allowed and 125th in pass defense. At the end of the day, I think this Texas defense has plenty of talent and that they will figure it out. The defense is young though. OSU might be able to capitalize on that with two of the most dynamic offensive players in the nation in Tylan Wallace and Chuba Hubbard.

There isn’t too much good to say about the Texas defense statistically. That doesn’t mean the defense will play bad though. OSU should be looking to exploit the younger players on the Texas defense.

We will find out a lot about what both teams are made of this weekend. Is Spencer Sanders cut out for this? Are Sam Ehlinger and Texas back? Can the Texas defense get a stop when it matters? Tune in on Saturday night at 6:30 on ABC to find out.