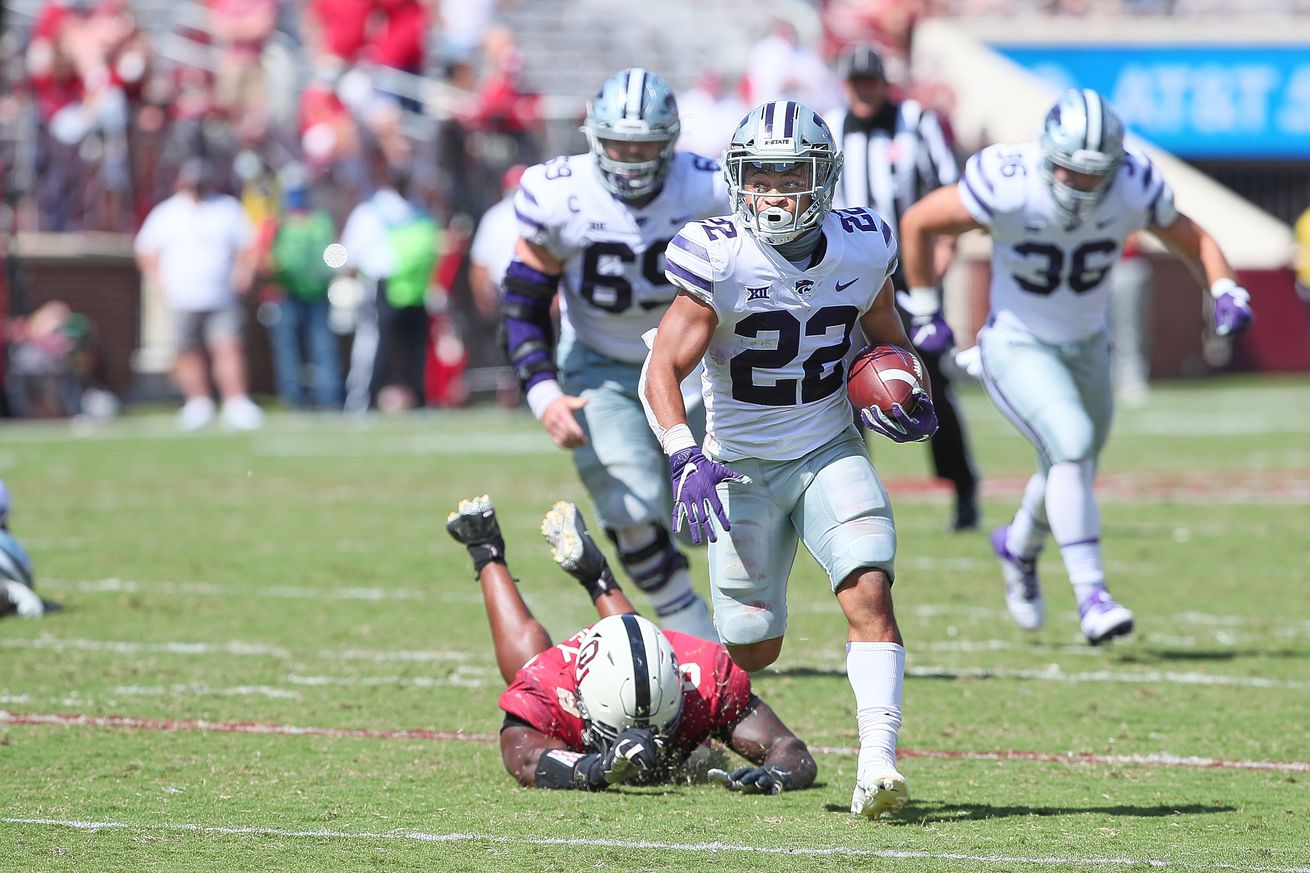 Photo by David Stacy/Icon Sportswire via Getty Images
Is chaos going to be the weekly mantra this season?

After the turmoil of the non-conference games we thought we knew what we were dealing with when it comes to Big 12 football.

Then the first week of conference games showed up and said:


I used the “Spanky throws money out the window” GIF last week to describe how I would bet the OU - KState game (if I was a gambler) and then Willie the Wildcat promptly corrected me:


The Red Hot Mess Raiders loaded up a 15 pt lead over Texas with three minutes left in the game and then:


With that in mind let’s delve into this weekend’s installment of Big 12 nonsense.


The Toads looked competent against Iowa State (a team that got trashed by Louisiana) but shouldn't plan on Sam Ehlin-GURR doing his best Brock Purdy impression (more on that later). Longhorns cover and I'm feeling the over which essentially means do the opposite or risk doing this...​
Baylor at West Virginia (ABC, Baylor -3, O/U 53.5)


Baylor looked slow against Kansas and their defense is not going to do what OSU's defense did to West Virginia, so I'm hopping on the 'Neer train for the outright win. The O/U seems low as I think both teams put up 25+ so I'm taking the over again.​
3:30pm Games (ET)


The Wildcats cast their season into the abyss against Arkansas State and then shockingly cut the Rattler off the Sooners without getting bit (please don't hold that against me).

If somebody backed up a truck full of free money and said bet it all the only thing I would touch would be the O/U which would seem ripe to get obliterated. Tech's defense is somehow worse than OU's and the Wildcats' D is most likely a little better than the Longhorns', so I could see both teams putting up 35 pretty easily.​
Oklahoma State at Kansas (ESPN, OSU -21.5, O/U 54)


I've hit all bets for OSU this season except getting nipped by half a point when I took West Virginia to cover the 6.5. The Cowboys obviously win this week, but what of the line and O/U?

I've gone with the opponent to cover and the under so far and I'm sticking with that as the Jayhawks park the bus in the box and dare Gundy to let his QB pitch it around all day. Nevermind we have no idea who will start as Sanders is listed #1, but who would be silly enough to risk his healing leg against a team you should easily beat with your true freshman backup? I think Kansas bets on Illingworth starting in which case the 2nd half playbook from the Mountaineer game will be in use.​
Prime Time


Review the first two games for both teams and let me know what happens cuz this is another game where the only thing I'm touching is the O/U.

Brock Purdy had the turnover of the century but the Cyclones still managed to put 37 on the board against the best defensive coach in the Big 12. The defense in Ames is designed to fight exactly what the Sooners bring to the table and Spencer needs to show the ability to not be Rattled (again, I ask your forgiveness). That line feels like a lot for a team that just gave up 38 in a loss to a team that lost to Arkansas State, but this season has been cray cray from the start so who the hell knows. I think the only certainty here is that both teams will put 30+ on the board, so give me the over. OU hasn't started conference play 0-2 since John Blake's last season (1998) and I think Riley gets them back in line.​
Everyone enjoy a full weekend of football! I’m already prepped for the same reaction as last week: