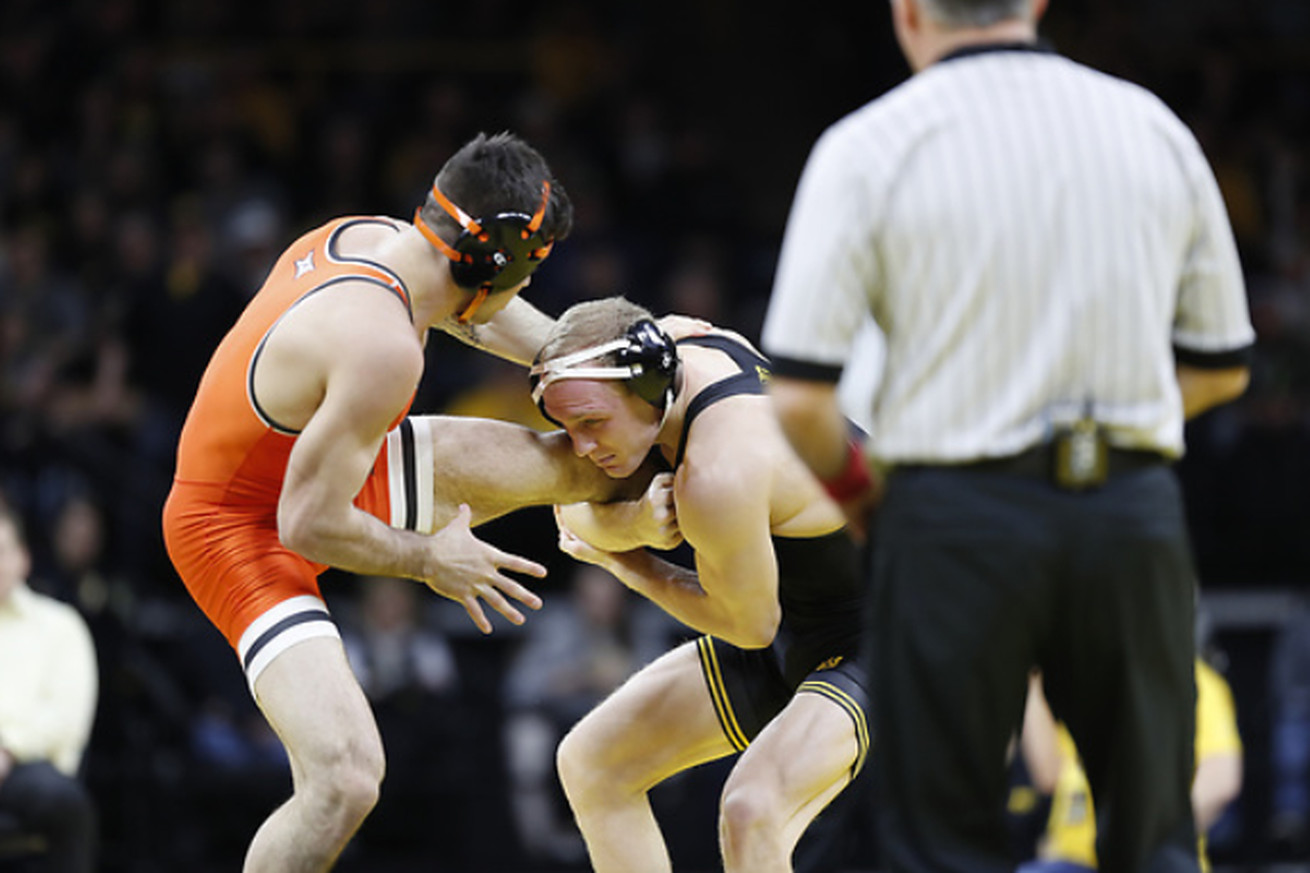 Down 2-1 after the first period, Sheets reversed No. 5 Kaleb Young 13 seconds into the second period and added two third-period takedowns with 1:29 of riding time for an 8-4 win at 157 pounds.

Anthony Montalvo, ranked No. 14 at 184, recorded the Cowboys’ second victory of the dual with a 7-2 decision against Nelson Brands, who slotted into the Hawkeyes’ lineup as No. 9 Abe Assad sat out for precautionary reasons.

Montalvo scored a takedown with 13 seconds remaining in the first period at the edge then escaped eight seconds into the second and used a headlock to take a 5-0 lead heading into the third. Brands escaped 1:35 into the third, but Montalvo responded with a takedown and locked up 1:31 of riding time for his 20th victory this season.

The Cowboys trailed 20-0 after the first four matches, losing all four by bonus points.

No. 4 Nick Piccininni dropped a 12-3 major decision to two-time reigning NCAA champion Spencer Lee at 125 then Reece Witcraft was dumped to his back and pinned in 2:38 by No. 3 Austin DeSanto at 133.

Austin DeSanto just injected Carver-Hawkeye with a ton of energy by securing a big fall. @FloWrestling

— Iowa On BTN (@IowaOnBTN) February 24, 2020​
The Hawkeyes continued to roll with a 15-4 major decision by No. 5 Max Murin against Dusty Hone, who gave up five takedowns and a cradle in the third that nearly resulted in a fall. In the marquee match of the dual at 149, No. 6 Boo Lewallen was tossed to his back by No. 2 Pat Lugo for a fall at 2:22.


Did you really think Pat Lugo was gonna end his career at Carver any other way?

The senior soaked it all in following a fall against No. 6 Boo Lewallen. @Hawks_Wrestling | @FloWrestling pic.twitter.com/236dX2TN3c

— Iowa On BTN (@IowaOnBTN) February 24, 2020​
After Sheets’ win zapped the energy out of the Iowa crowd, No. 6 Travis Wittlake dropped a 3-2 decision to No. 2 Alex Marinelli at 165. The two traded escapes then Marinelli scored a takedown with 46 seconds remaining for the win.


Alex Marinelli is just fun to watch. Plain and simple.

This late takedown in the third helped him secure a 3-2 win.@Hawks_Wrestling | @FloWrestling pic.twitter.com/WO8BTfIjg4

— Iowa On BTN (@IowaOnBTN) February 24, 2020​
Top-ranked Michael Kemerer racked up four takedowns and forced two stall calls against No. 13 Joe Smith to remain undefeated at 174 and give the Hawkeyes a 27-3 lead.

Montalvo’s win cut the deficit to 27-6, but Iowa won the final two matches at 197 and heavyweight.

No. 6 Jacob Warner of Iowa had a takedown in each period against No. 16 Dakota Geer and complied 1:57 of riding time for an 8-3 win at 197. Tied 2-2 in the second period, Warner scored a takedown with 40 seconds remaining for a 4-2 lead then blew the match open in the third with an escape and a takedown. OSU’s undersized heavyweight Austin Harris allowed three takedowns, a reversal and was hit for two stalling points in an 11-1 major decision loss to No. 3 Anthony Cassioppi for the 34-6 final.

The Cowboys will have two weeks prepare to win their eighth consecutive Big 12 tournament championship March 7-8 at BOK Center in Tulsa.