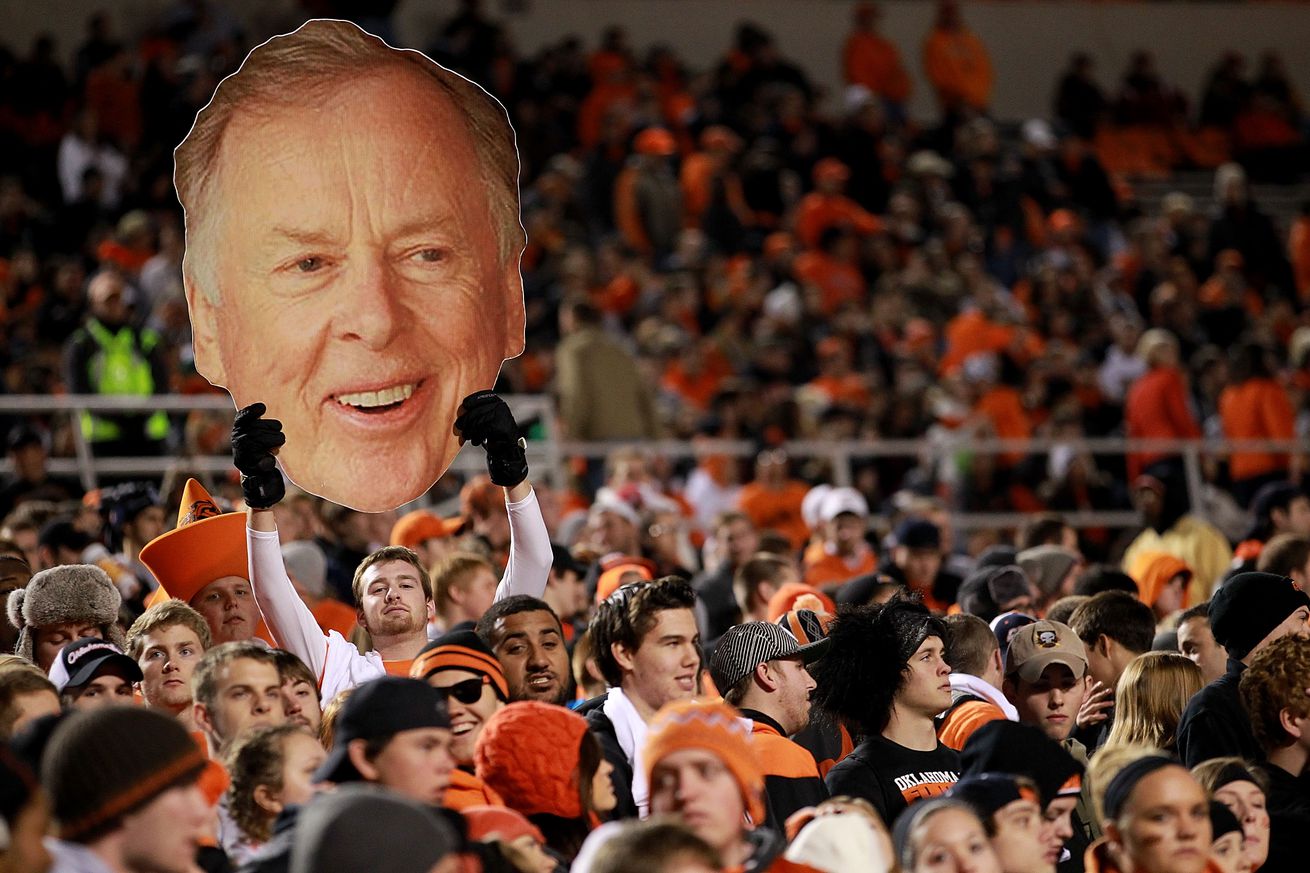 Oklahoma State alumnus and mega-booster Thomas Boone Pickens, Jr. died Wednesday at his home in Dallas. He was 91 years old.

Here’s how the OSU community and sports world reacted to the news:


All of us in the @okstate family are deeply saddened by the passing of @boonepickens. At the same time, we join in celebrating his incredible life. He was the ultimate Cowboy - https://t.co/7fBLhNbbBQ #okstate #RememberingBoone pic.twitter.com/Vy5ZK2kwHB

— Oklahoma State Athletics (@OSUAthletics) September 11, 2019​
Rest In Peace, Mr. Pickens. Thank you for everything you’ve done for Oklahoma State, Stillwater, and so many others. https://t.co/SmYNfam18E


Mr. Pickens is a big part of our success and we’re all thankful for the lasting impact he’s had on Oklahoma State. It would have been difficult for us to climb as high as we have without him. He’ll be missed, but his legacy here will live on for a long time to come. pic.twitter.com/1jYVwBcHo0


Had the amazing opportunity to meet @boonepickens this past offseason. Incredible moments I’ll cherish forever. His generous contributions to Oklahoma State helped change our trajectory as a program and for that we will always be thankful! #RIPBoone https://t.co/FK9pSdLwNF

— Jordan Oliver (@that_dude_JO) September 11, 2019​
Rest In Peace to such an incredible human being who spent his time supporting me and many others. #RIPBoone https://t.co/Imo8wa4OTV

— Pay Me in Bitcoin (@RussellOkung) September 11, 2019​
Rest Easy. Your charitable donations did not go unnoticed! You helped a lot of people on this earth! https://t.co/w01FTSzVQU

The legacy that you left behind will stand the test of time.

— Kyle Crutchmer (@KyleCrutchmer) September 11, 2019​
I just wanted to share some words on the man who bet on OSU every single day. Thank you for everything you did for @okstate RIP @boonepickens and as always #GoPokes pic.twitter.com/Jh72lRL7tf

— Baillie Burmaster (@bayburmTV) September 11, 2019​
Sad to hear the passing of one the smartest, most interesting, driven persons I’ve ever met...amazing man and life! He loved his University! Condolences to his family, friends, and the @okstate Family! RIP Boone https://t.co/3wmdTuUBDe

We knew it was only a matter of time, but it's still shocking none the less.

— Hope is Undefeated (@RobertW_OkSt) September 11, 2019​
Not just football, the entire #okstate athletic department wouldn't be what it is today without his dedication and commitment. RIP Boone Pickens.

— Phillip (@OKTXARPoke) September 11, 2019​
#RIPCowboy, you meant so much to this university and its people. You’ll be missed greatly. https://t.co/zAaG7PhdSd


Thanks for everything. RIP. https://t.co/RYfcpUperc

— Brett McMurphy (@Brett_McMurphy) September 11, 2019​
T. Boone was the epitome of Loyal & True. What an amazing life and what an amazing legacy to have left behind. We are all so proud to be Cowboys, today and everyday. Thank you, T. Boone.

— Lauren Blackwell (@Lo_Blackwell) September 11, 2019​
Never walked away after interviewing or being around Boone where I didn’t shake my head in amazement & have a smile on my face. It is as safe as safe can be ... that there’ll never be another like Boone Pickens. Unfortunately. RIP @okstate @news9 https://t.co/UYanLxIh3T

— Darren Rovell (@darrenrovell) September 11, 2019​
One of those titans who seemed like he’d live forever. Had as big an impact on Oklahoma State as any mega booster anywhere. RIP. https://t.co/b4SzsAHzJD