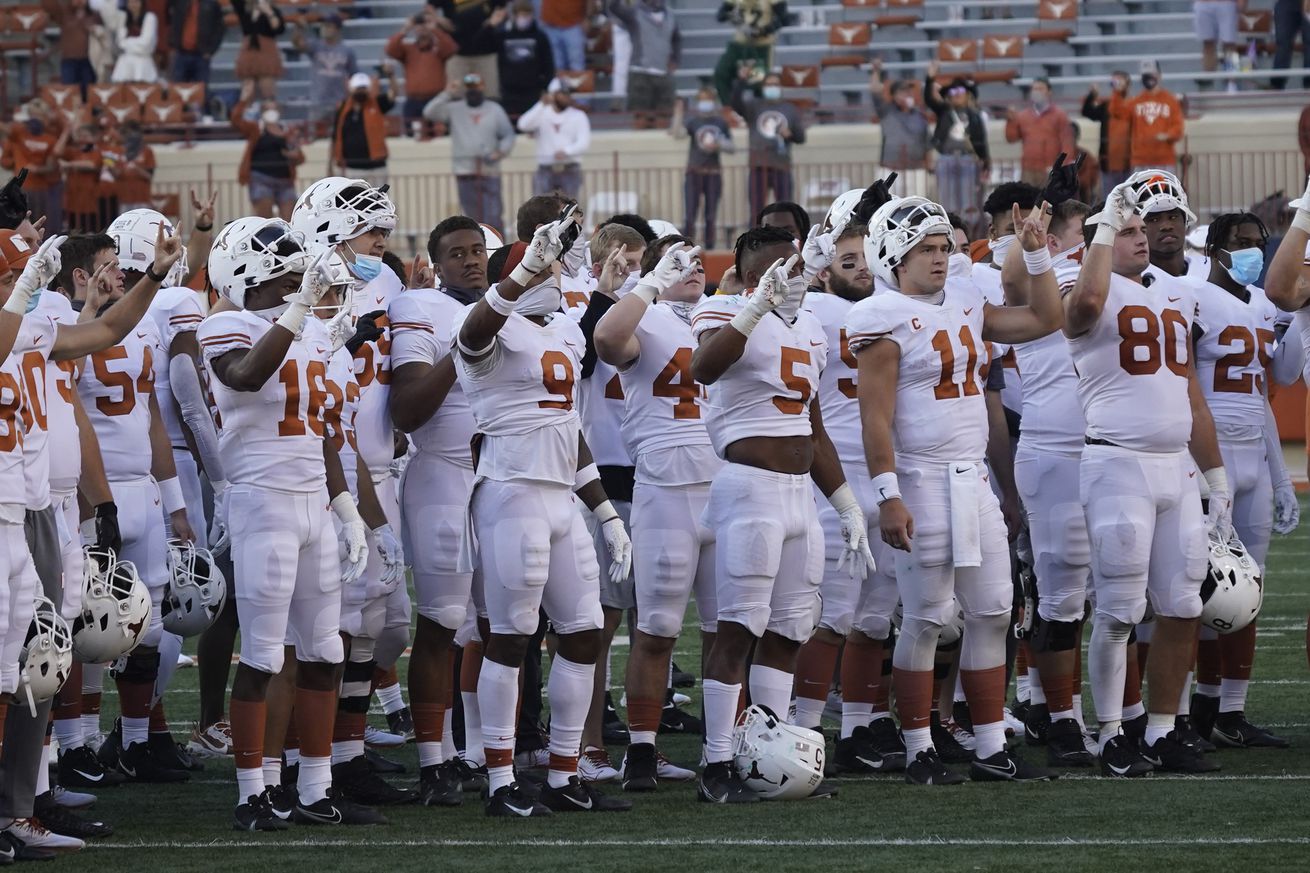 Scott Wachter-USA TODAY Sports
We went to our colleagues over at Burnt Orange Nation to find answers to out questions about the Longhorns.

As No. 6 Oklahoma State prepares to face Texas on Saturday at Boone Pickens Stadium, we reached out to Gerald Goodridge of SB Nation’s Texas site Burnt Orange Nation for some insight into the Longhorns.

CRFF: What is the latest status of Joesph Ossai? What can you tell about his injury?

BON: Ossai left the game against Baylor after injuring his shoulder just before halftime against Baylor while attempting to tackle Baylor QB Charlie Brewer. He went to the locker room early, returned to the sideline with a “questionable” status and returned to the game for one series. Ossai is one of the toughest guys on the team, perhaps second only to quarterback Sam Ehlinger, and actually played most of last season with an arm injury as well. I think everyone, including Ossai himself, expects him to play in Stillwater Saturday.

CRFF: What’s a stat for Texas that OSU fans should be paying attention to Saturday?

BON: Average starting field position for the Texas defense/OSU offense. There has been a trend of Texas giving the defense a short field for whatever reason, whether it’s a turnover or a bad punt. Texas is third-worst in the conference in opponent average starting field position, with opponents starting at on-average the 33-yard line. In the two losses to Oklahoma and TCU, the defense took over at the opponents 40-yard-line or worse a total of nine times.

CRFF: What is this Texas team’s biggest Achilles heel?

BON: The Longhorns’ offensive line has really been its biggest struggle, in spite of experienced leadership in a few spots. For the second year in a row, Oklahoma was able to exploit Texas wish some fairly simple stunts along the line, literally matching their yearly total in their one game against Texas. Oklahoma State is yet another team with a potent pass rush, so that is something I am watching Saturday.

CRFF: What role do you think the experience of Sam Ehlinger plays in Saturday’s game with Ehlinger being in his final year vs. Sanders in his second year starting?

BON: This is a double-edged sword. Ehlinger has been in a TON of slugfests and won a good number of them so if it comes to a shootout I think Ehlinger is not one to blink in those games. I also think there have been some spots where Ehlinger has been on a revenge tour, meaning he’s trying to right some wrongs and forcing some throws he probably shouldn’t.

CRFF: Who would say were some unsung heroes for the Longhorns this season?

BON: Most of the heroes have been pretty evident this year, but a guy I’d like to see this coaching staff take a bigger advantage of is Jared Wiley. The 6-foot 7-inch sophomore tight end has been underutilized this year, with just six receptions - two of which have gone longer than 45 yards - and what feels like zero red zone targets. He’s easily the tallest player on the field and moves way better than any human being should at that size.

CRFF: Tom Herman seems to talk quite a bit about how “This wasn’t how we practice” (Or at least I’ve seen some of that on social media). What do you think changes between the supposedly better practices they have and the in-game product?

BON: This is tough because every week they have a good Sunday practice, with the quality of practice inversely related to how well they played the previous day. A lot of the mental mistakes are grouped around two groups, the offensive line and the secondary and both units feature a senior captain who does dumb stuff. Senior center Derek Kerstetter was on the receiving end of drive-killing unsportsmanlike conduct penalties in each of the last two games. In the secondary, Chris Brown - in spite of playing fairly well - seems to do that annoying thing where a defensive back celebrates a tackle in spite of giving up a big play. It’s on your on-field leaders to help keep the discipline on the field and there are at least two of them that I feel are not living up to the C on their chest.

CRFF: Speaking of Herman, there seems to be some calling for his head from fans. What’s your perspective on that and what do you think is the mood of the fan base right now?

BON: It’s funny I sat down to answer this on Wednesday afternoon, but as an Oklahoma City resident couldn’t because of power outages (shout out to the incredible linesman for OG&E who are literally saving us all). If I had answered it then, I would have said that fans are rightfully upset, but Herman can quiet them down by winning. Then Wednesday night the wheels fell off of the Tom Herman train as 2022 must-have quarterback Quinn Ewers decommitted and is seemingly trending toward Ohio State. According to reports, Ewers is planning on taking the top talent with them and/or turning Texas targets away from the Longhorns. Even for people in the “wait and see how the season shakes out” camp like I was, it seemed to be the anvil that broke the camel’s back. I don’t know who the next head coach is but it seems like the writing is on the wall for Tom Herman.

CRFF: OK, I’m gonna have one more questions that you had for me (sorry about that) but Texas acquired former Oklahoma State OC Mike Yurcich. What are your thoughts on him? What have you seen that you’ve liked and disliked?

BON: Full transparency, I think we’ve not seen a full game of Mike Yurcich’s offense at Texas. I was hopeful this wouldn’t happen, but it seems like Herman has his hand in the offensive gameplan too much. There are just too many shades of years past for me to think otherwise. I think when Yurcich has been able to cut loose, Ehlinger has been able to play fast and loose - a style he seems to thrive in. When they turtle up in the third quarter of basically every game, things go sideways and it has literally cost them two games.

BON: The 3.5-point spread means that the folks in Vegas are either trying to get some easy money from people by duping them into picking Texas or know something we don’t. This is absolutely the type of game that Herman figures out a way to win in the past, but I just can’t pick Texas based on what I’ve seen this year. 31-28 Oklahoma State.

Check out more from Gerald on the Longhorn Republic Podcast!