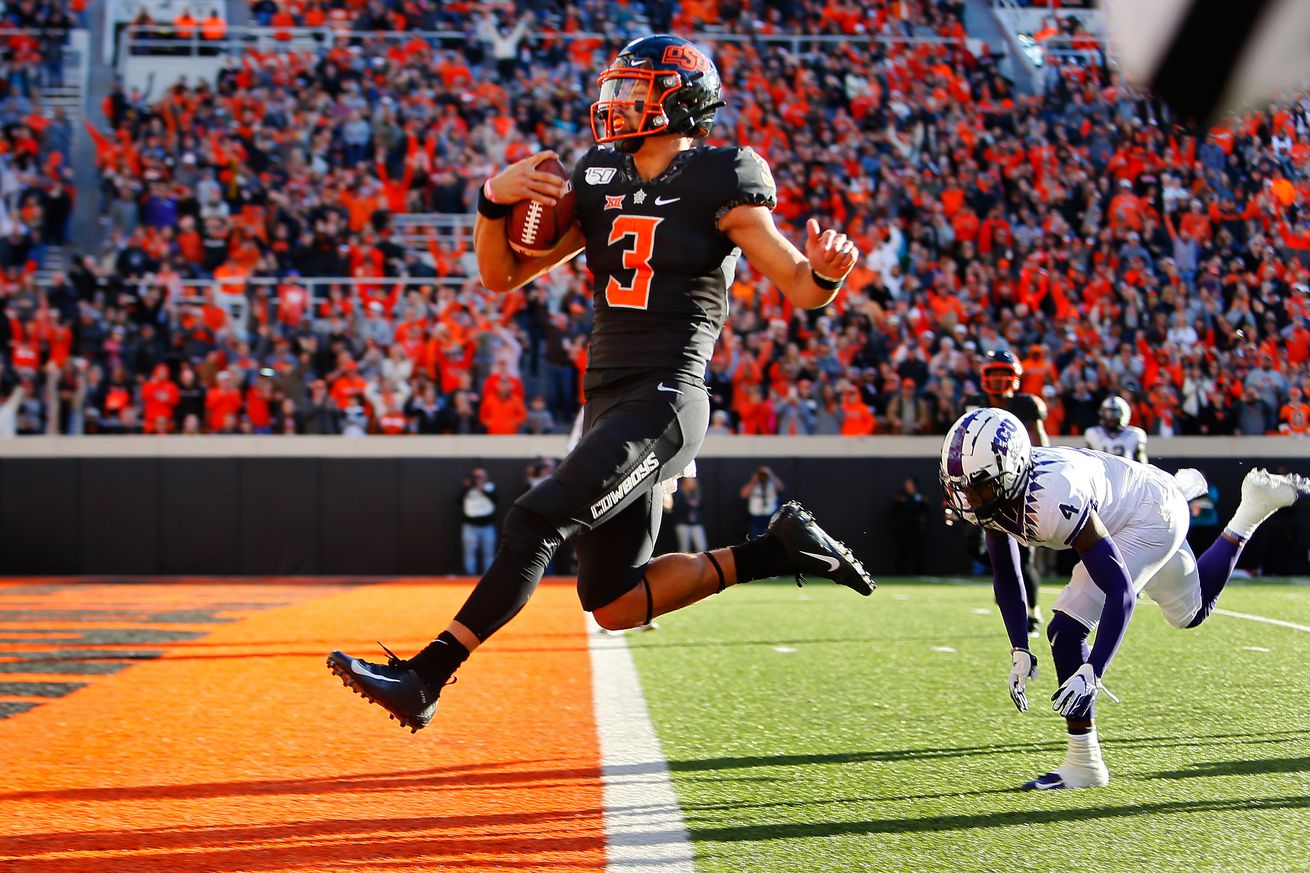 Photo by Brian Bahr/Getty Images
Welcome to High Noon Highlights, a place to catch up on everything you missed in Oklahoma State Athletics and beyond.

Spencer Sanders could be the key:

Burnt Orange Nation is going through each Big 12 team and talking about the major story lines with each of them. For Oklahoma State, that story line involves quarterback Spencer Sanders.


Not only does Oklahoma State get their two superstars back on offense. The Cowboys are also returning their second and third leading receivers from last season in Braydon Johnson and Dillon Stoner, both of whom saw extended opportunities after Wallace’s injury.

After losing quarterbacks coach and offensive signal-caller Michael Yurcich to Ohio State following the 2018 season, Oklahoma State experienced a lot of inconsistency on the offensive side of the ball in 2019.

Quarterback Spencer Sanders’ dual-threat ability presented a new element to Gundy’s air-raid system. Opposite of a prototypical Oklahoma State pocket-passing quarterback, while he flashed plenty of arm strength, Sanders experienced growing pains and decision-making problems all throughout his first campaign as the starting quarterback. In all, he threw 11 interceptions last season.

Dating back to the previous decade, Gundy has managed to sustain success atop the conference through the prowess of his well-renowned air-raid offense. Oklahoma State has boasted a top 10 offense a total of five times in the last decade. Gundy’s most successful teams have been those with an elite offensive trio on their side of the ball. {Burnt Orange Nation}
​
A.J. Ferrari on John Smith:

Track Wrestling is doing a series where wrestlers are talking about their wrestling heroes and for Oklahoma State commit A.J. Ferrari, that hero is no other that his coach, John Smith.


“I have a couple wrestling heroes and I’d say the main ones would be John Smith and Frank Molinaro for sure. It’s because of the way they are on the mat and off the mat. They both had great careers on the mat, but John Smith is a great person. He’s very down to earth and he’s a strong Christian. He still goes to church every Sunday, or he tries to go, he was telling me. I’ve always looked up to that. On top of that, he’s in the Italian Hall of Fame. That’s huge for me because that’s my goal. I’d like to be in the Italian Hall of Fame, too. I’m an Italian American. I aspire to be like him in all ways. In his wrestling and his lifestyle. {Track Wrestling}
​
Blake Jarwin could be a deep sleeper on a Cowboys offense with a lot of talent:

Yahoo Fantasy analysts Dalton Del Don and Matt Harmon discuss former cowboy back Blake Jarwin and how much he’ll get the ball this year on a loaded Cowboys offense.


Dalton also points out that not only are Randall Cobb’s departed 80+ targets up for grabs, but the Cowboys delivered 440 yards of offense per game last season. There’s a lot of love to spread around here, and if Jarwin can represent a more efficient version of 2019 Witten, he has TE1 upside in 2020. {Yahoo Sports}
​
Around the Big 12:

Ian Desmond to opt out