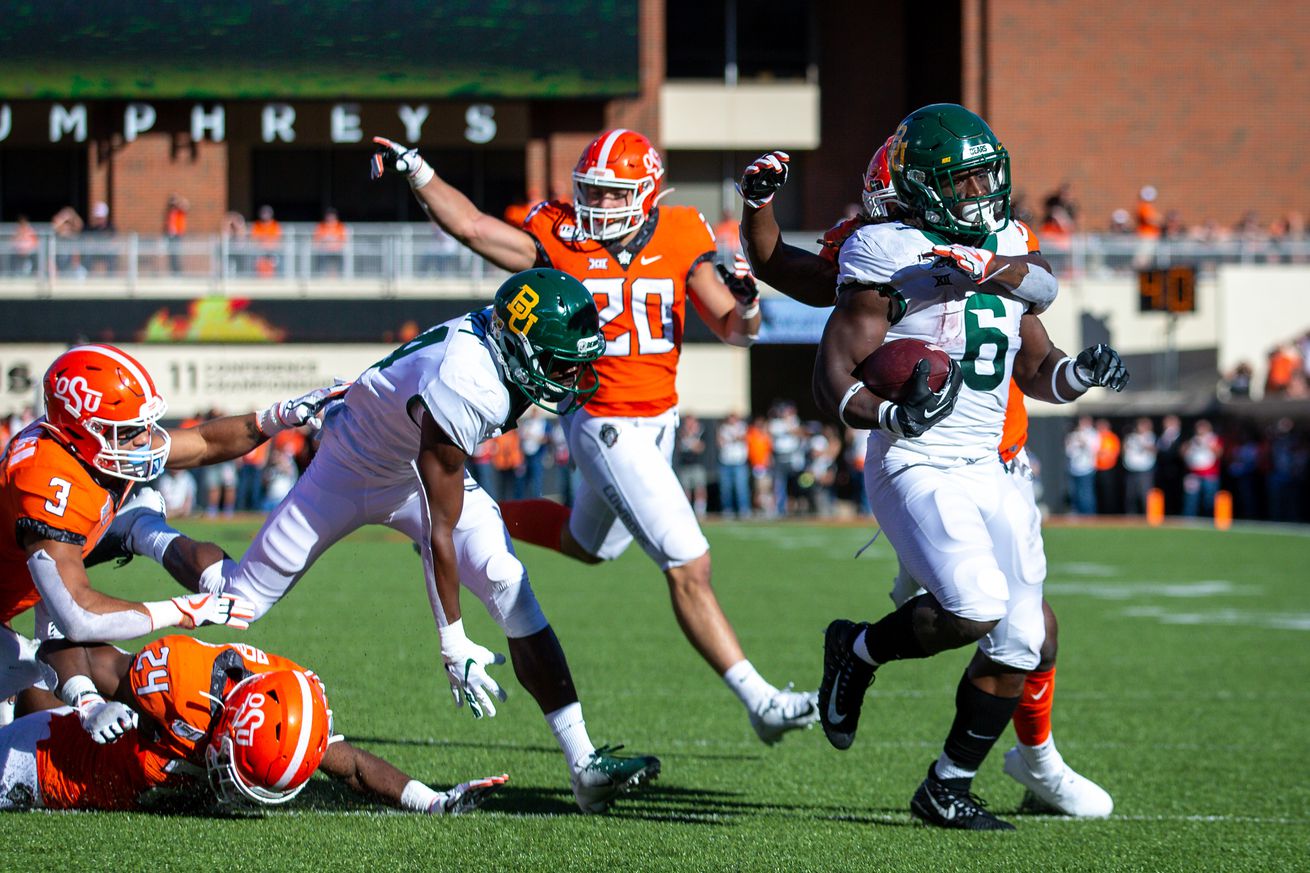 Charlie Brewer and JaMycal Hasty crushed Oklahoma State’s comeback attempt in a 45-27 loss to undefeated No. 18 Baylor on Saturday at Boone Pickens Stadium.

Chuba Hubbard, the nation’s leading rusher, ran for 171 yards and two touchdowns of 2 and 3 yards for OSU (4-3, 1-3 Big 12). Spencer Sanders was 18-for-32 threw the air with 157 yards, but committed three turnovers with an interception in the second quarter and two costly fumbles in the fourth.

The Cowboys started the game with a quick three-and-out, and the Bears capitalized with John Lovett’s 25-yard touchdown run to end a three-lay, 62-yard drive.

OSU responded with a 13-play, 78-yard drive as Sanders threw a beautiful fade in the corner of the endzone to Jordan McCray. A Baylor turnover and a series of punts from both sides persisted until the Cowboys broke through with a 2-yard TD run by Hubbard with 4:15 left in the first half.

The Bears drove the length of the field, but settled for a 28-yard field goal by John Mayers after the defense stiffened up near the goal line. With just enough time left to orchestrate a scoring drive before halftime, the Cowboys reached the Baylor 7-yard line before Sanders delivered his first of three turnovers on the day, an interception on a badly thrown fade to McCray.

The Pokes held a 13-10 halftime lead, but would manage only 14 points the rest of the way with runs of 3 and 68 yards by Hubbard and LD Brown, respectively, but it was no match for the offensive onslaught brought by the Bears.

Hubbard’s score gave OSU a 20-10 lead with 9:35 remaining in the third quarter, but Baylor took a 24-20 lead with Hasty’s 5-yard TD and Fleeks’ 64-yard dash to the endzone. Brown regained the lead for the Cowboys only to see Brewer plunge in from 2 yards out and Terrel Bernard scoop and score on a fumble return for 20 yards before Hasty put the game out of reach with a 73-yard touchdown.

Baylor head coach Matt Rhule has the Bears headed in the right direction with nine consecutive wins dating back to last season. At 7-0 this season, the Bears remain tied at the top of the Big 12 standing with Oklahoma.

The Cowboys, however, are hovering above .500 with two games before their next bye week. Is Sanders the future? He’s shown he could be, but his turnovers dwindle confidence with each performance. Does Dru Brown deserve to start? I’ll leave that up to OSU coach Mike Gundy and company to make that call.