CRFF - Countdown to Kick-Off: 7 goals for Oklahoma State in 2019 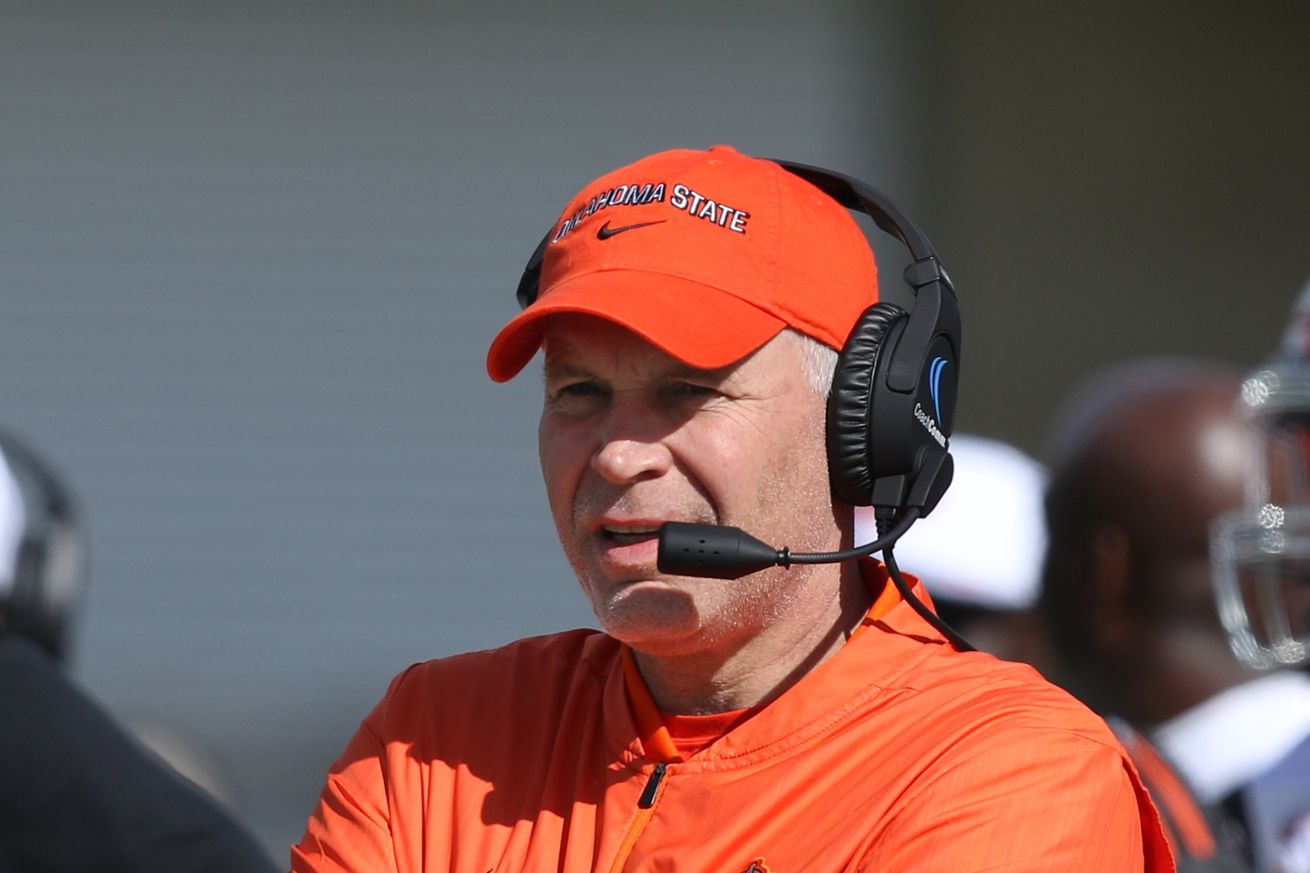 Photo by Scott Winters/Icon Sportswire via Getty Images
We’re one week away from kickoff. Here’s seven things we would like to see this season.

Oklahoma State will kick off its 15th season under head coach Mike Gundy this fall. Cowboys Ride For Free will have a 15-day countdown with one article each day until the Cowboys’ season opener Aug. 30 at Oregon State.

Oklahoma State again enters the new football season with plenty of unknowns. Last year, the departure of Mason Rudolph and James Washington left the offense with a lot to figure out.

A season later, Tylan Wallace has filled Washington’s shoes, but we were left waiting for the quarterback of the future after Taylor Cornelius captained the squad to a 7-6 season before graduating. In addition to the quarterback questions, a young defense struggled at times last year but returns nearly everyone. With all that said, here’s seven things we would like to see in 2019-20.


While the defensive line thrived in a new system under Jim Knowles (OSU finished tied for 10th in the nation in team sacks with 39), a young secondary struggled. The defense let up 32.5 points-per-game, good for No. 97 in the nation out of 130 teams. Of course the Big 12 is the most lethal offensive conference in America, but the defense likely needs to be top 50 if OSU wants to have a New Year’s Six-caliber season.

This team isn’t likely a NY6 candidate, but shaving that points per game number down to around 28 should be a realistic goal considering the amount of guys returning next season. We saw plenty of Kolby Peel and Jarrick Bernard as true freshmen in 2018. With a year of experience under their belts, the secondary should be stronger next season.

Another place for improvement is turnover margin, an area that is normally a strength for the Pokes. OSU finished the year tied for No. 117 (with Baylor, ironically) at minus-9. Another side note: Kansas finished No. 2 in turnover margin at plus-16. If OSU can get back to forcing more turnovers than it gives up, I would think that would correspond with that ppg number going down. So, the overall goal for the defense this year is improve: mainly by cutting down points allowed and doing it by forcing more turnovers.


I’m not here to suggest a starter. I’m not here to say Spencer Sanders should get considerable snaps this year if Dru Brown looks like the better quarterback. However, this season should not pass without giving us an idea of what the future could look like at quarterback.

Mike Gundy said at Big 12 Media Days that both QBs will get time. I’m excited to see how that plays out through a non-conference slate that screams “softball!” like no other. Both may even split time through the entire season. But at the end of the year, Brown is gone. It would be ideal to know where Sanders is at from a talent level at the end of the year. And if he’s not the guy, lets get Brenden Costello some looks.

My guess is Sanders will be fine and will likely open 2020-21 as the starter and we will get plenty of chances to see him this season. My goal here is to not have a repeat of last season. Sanders needs to play some meaningful snaps. If he gets those and the staff still believes Dru Brown is the guy, start him by all means. My goal here is to get Sanders some meaningful snaps past the Tulsa game. Put him up against good Big 12 competition and see how he does.

I don’t want to wrap up the bowl game and know nothing about what OSU has at quarterback for the following season again. Brown could be a great QB, but he is not the future because this is his last season.


This one probably seems mundane because OSU is nearly always good on offense. The reason I want this to be a goal is because the Pokes just lost a great offensive coordinator to Ohio State. The talent is back and I’m excited to see how Sean Gleeson uses it.

Gleeson has plenty to work with in a Bilitnikoff award finalist in Tylan Wallace and an always stocked Oklahoma State receiver room. The running backs are interesting too. Chuba Hubbard has the potential to be one of the best in the nation this season and true freshman Deondrick Glass is more than talented enough to see snaps. LD Brown and redshirt freshman Jahmyl Jeter will be the power backs; Brown should get a fair amount of snaps and will likely be Hubbard’s true backup.

There are playmakers everywhere and it should be fun to see how Gleeson puts his spin on the offense after six great seasons from Mike Yurcich.


This ties in to our five days to kickoff post coming in two days, so stay tuned for that. Now lets get to some numbers...

While Gundy and the staff have found plenty of “diamond in the rough” types (Justice Hill was No. 963 in the nation in that 2016 class), recruiting success has been found to directly correlate to playoff odds. For example, take this excerpt from a February 2018 article from ESPN.

Since the playoff’s inception, almost every team that has played in a CFP semifinal has averaged a recruiting class ranking of 15 or better for the four years prior to their playoff berth. The only exceptions to that rule have been Michigan State, Washington and Oregon.

OSU’s four-year recruiting average (37.75) doesn’t come with 20 spots of the top 15. There aren’t necessarily any obvious answers as to how the staff can improve on that. A piece of that pie is budget. OSU simply doesn’t have the recruiting budget that most other schools who finish ahead of it do.

In short, the staff will continue to have to find the low three star guys like Hill and Washington to be able to compete. Nearly every class is good for one or two four star guys, but those are almost always quarterbacks and receivers. Finding recruiting success on the defensive side of the ball is going to be tough, but needs to happen.

OSU currently has 14 commits for 2020, so the class is mostly filled out. The staff will look to add 6-8 more players, but none will likely boost the Pokes No. 41 ranking much. As Phillip recently pointed out in our slack chat, it seems as if four star OSU targets have been committing to other schools Texas every week and there aren’t many left.

With one four-star (QB Shane Illingworth, No. 222 nationally) committed, this class could add one more but I wouldn’t count on it. This goal won’t be reached for 2020, so here’s hoping the class of 2021 could rise above the Pokes four-year high of No. 34 nationally.


In 2018, OSU lost to Kansas State, Texas Tech, TCU, Oklahoma, Baylor and Iowa State. The Cowboys beat Texas and West Virginia squads that they probably shouldn’t have, and played Oklahoma within one point. Imagine how last year could have gone if they won close games against Baylor, TCU and OU.

As easy as it is to say that, OSU could have lost close games to Texas and WVU just as easy. The part that baffles me is the double-digit losses to 5-7 Texas Tech, who probably ended up with that record due to injuries, and 5-7 Kansas State.

The Pokes played better than they were against the top dogs while playing far worse than they were against lesser opponents. The goal for 2019 is to eliminate the latter half of that equation. Beat the teams they’re expected to beat and also play up to the top talent. If OSU can do that, they could wind up with a nine- or 10-win season.


This goal ties in a little with the last one. Looking at the schedule, let’s put down losses at Texas, at ISU and home to OU. That leaves a 9-3 regular season record. I’ll assume there’s one slip-up somewhere else, because every team is susceptible to at least one slip-up, to finish 8-4 in the regular season.

Nine or more wins would be considered a successful regular season and seven or less would be a disappointment. ESPN considers OSU favorites in eight regular-season games — losing to the aforementioned OU, Texas and ISU, plus a road loss at Texas Tech. ESPN gives OSU a 47.7 percent chance of winning in Lubbock.

Obviously, QB play can boost or dampen a teams’ expectations. If Brown and/or Sanders outperform expectations, nine or 10 wins would be in play. If it’s less than the expectations, we’re looking at another six- or seven-win season. Personally, I think Gundy is more dialed in this year and we’ll see less of the sloppy play we saw at times last season. Put me down for an 8-4 regular season. I don’t make bowl predictions, so 9-4 or 8-5 is my expectation.


In the last three years, my peers and I in the class of 2020 have seen three things that most students don’t get: rushing the field / court in football and basketball and a “College GameDay” appearance. Getting a win over OU at home to send out the class of 2020 would take the cake.

Any win over OU is special. They could potentially be playing a ranked Oklahoma State team with two losses entering Bedlam. To disrupt a potential OU playoff bid would be perfect. It’s a little bit of a pipe dream as it almost always seems to be in this series, but it isn’t out of the realm of possibility.

Assuming OU slips up once before Bedlam, a win could also potentially ruin a bid for a third straight Heisman for an OU QB; Jalen Hurts isn’t the favorite but is one of the top five candidates.