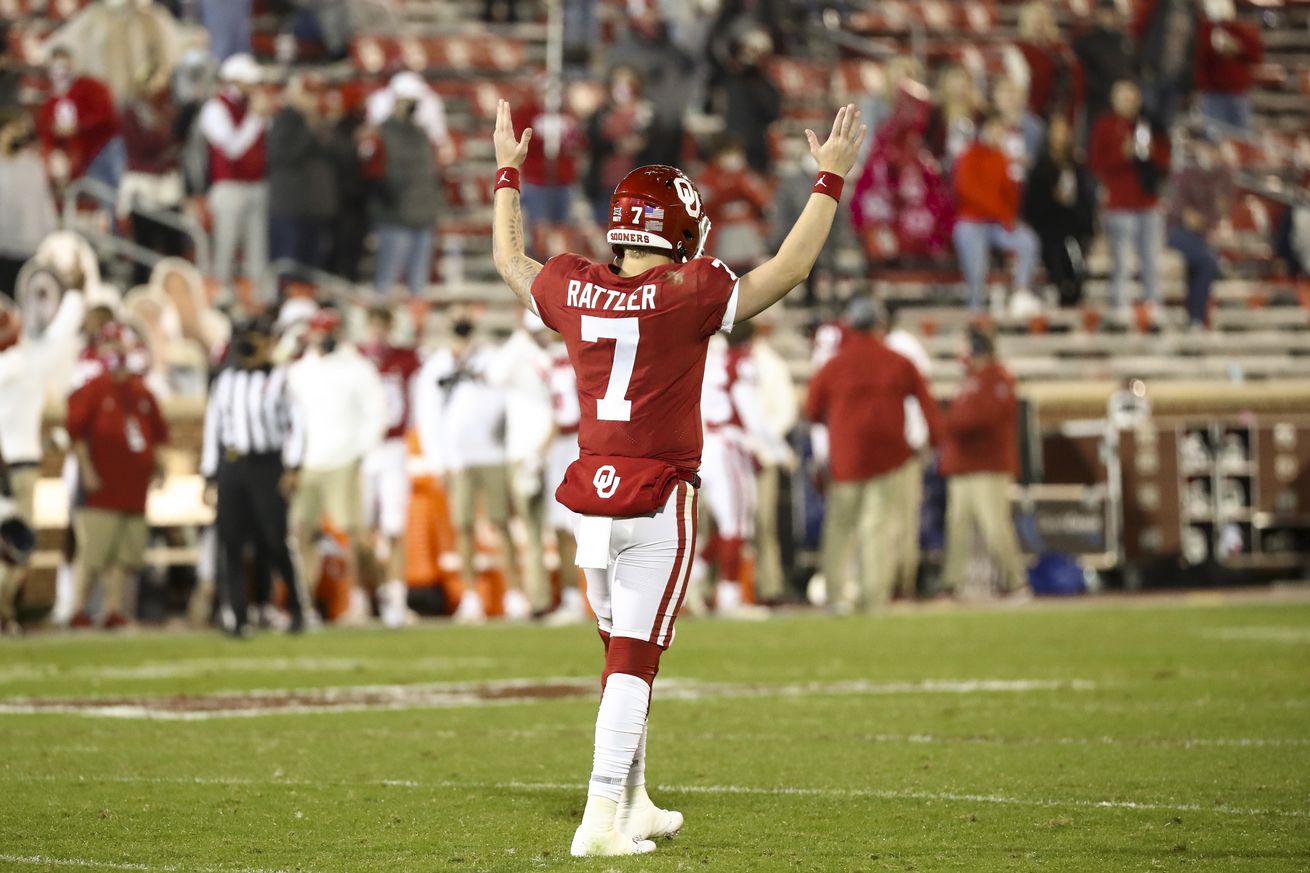 Between a fast start for OU and Gundy folding up the tent down 21, this had the feeling of inevitability all night.

This was never a game. If you didn’t understand what was going on two possessions in then you weren’t paying attention.

Oklahoma started fast, Gundy and Oklahoma State started as if they had two more weeks to prepare, and historical Bedlam happened again.

Much like the rivalry games of old that I’ve experienced, not a universal blowout but never in doubt.

Cowboy fans hung around until early in the 4th quarter when, with OSU down 21 on 4th and 8 at the OU 39 yard line with 12 minutes left in the game, Gundy chose to....

That pretty much encapsulated a game where the Pokes NEVER looked prepared to compete in a game that had HUGE Big 12 title implications.

Oklahoma State folded up the tent.

No offense to the players. I don’t fault them at all.

The coaches bare the brunt of this. You knew what you had to do coming into this game and had two weeks to figure it out, and it was Lincoln Riley that pulled out the motions and misdirections that made the difference. OSU ran the same old stuff. Spencer got dinged and the Cowboys proceeded to trot out Illing(s)worth for a LONG time before inexplicably putting Sanders back in the game when it was clearly out of hand AND then didn’t go for it on fourth down in plus territory down 21 in the fourth quarter. Chuba and LD were clearly not healthy but it took until the 4th quarter before we saw Desmond (DeSean) Jackson. Kasey Dunn, who has had a decent year up to this point as a play caller, only broke out the reverse pass that drew a defensive holding penalty. Otherwise it was vanilla nonsense behind an offensive line that looked more like a sieve than a dam.

What breaks my heart more than anything is that any kind of offensive production would have given a pretty good defense a chance. Instead, Gundy hung them out to dry over and over, doing nothing to try and take the pressure off of them, continuously putting them back on the field against a college football play caller that I would rank among the best ever.

Rattler was efficient. He got the ball to his players on short passes for the most part and they produced plenty of YAC. He isn’t a “runner,” but he gashed OSU a couple of times when it mattered. Riley has definitely coached him up since yanking him during the RRS and it showed. The fact is, at the end of the day, the Sooners have more talent on the depth chart and were able to withstand a few absences. Oklahoma State on the other hand couldn’t get it going offensively due to some attrition and a defensive unit that has found its footing, and it was never even a question. The one turnover on the tipped pass didn’t make the difference. OSU looked physically overmatched, and you have to wonder if the additional scholarships given to the defensive side of the ball over the past few years have taken a toll in the offensive trenches.

The greatest offenses in OSU history involved pocket passers, yet the Cowboys keep ending up with “mobile” QBs. I really like Spencer Sanders, much in the same way I really liked JW Walsh. But Clint Chelf was the better QB because he could sling it better than JW.

Those guys don’t open up the field. I know Illingworth didn’t light it up, he’s young and new to the college game and needs time, but he was instrumental in all 13 OSU points. This is Gundy’s wish...a good defense with an offense that can control the ball a little and not turn it over. He loved Zac Robinson and gave up in Bedlam 2009 because of it.

He’ll do it every time, unless you have an OC or a QB that says screw it, we are winning this game or we are going down in flames.

I’m done with the whimpering losses to OU. The Sooners are historically better but there is NO reason the Cowboys could not have won more than a couple of games (both due to luck as far as I’m concerned) in the past 10 years.

Once again OSU doesn’t control their own destiny, and without good fortune will be on the outside looking in during a season and schedule that had the table set for Cowboy success. OSU fans need to be rooting hard for West Virginia, as they play both Iowa State and OU to close their season, and Gundy better keep his troops moving with three winnable games left. A Mountaineer win in either contest would have significant implications for the Big 12 title rematch game.

Next up, the Cowboys take on Texas Tech when they come to Stillwater on Nov. 28.